How to Stop Rain 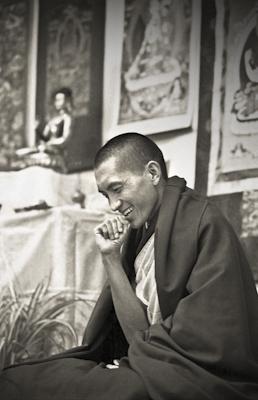 Performing Sur1 helps to stop rain. Think that you are making requests to those beyond samsara and also to worldly beings such as devas and landlords. Make a big sur offering with tsampa (roasted barley flour), butter and the twenty-five special substances (it doesn’t have to be a lot, just a pinch is okay).

Visualize yourself as the deity. Then, dispel interferences by sprinkling vase water and reciting:

From your heart come numberless or one Vajra Amritas who dispel the interferers abiding in the torma; they are chased away beyond the Atlantic Ocean and it is impossible for them to come back. The torma that appears to be truly existent, to exist from its own side, becomes empty, as it is empty. While it is empty – while your mind is in emptiness, non-dual with that –this manifests into a syllable BHRUM. The BHRUM transforms into a very expansive jewel container. Then an OM appears inside it. This transforms into great oceans of uncontaminated transcendental wisdom nectar:

It appears as great oceans of uncontaminated transcendental wisdom nectar to the numberless landlords and devas. They receive all that you have expressed in the words. They become extremely satisfied and unbelievably happy to accomplish your wishes, to stop the rain completely and for you to receive rain only when there is need for it.

Then recite the names of the Four Tathagatas:2

The five desire enjoyments and this torma of oceans of nectar, I offer to the assembly of landlords of the three thousand galaxies.

I make offering to the five long-life sisters and the twelve earth goddesses (tenma) who are guarding the Buddha’s teachings and to all the devas, nagas and protectors who are abiding in the Snow Land. Especially, I offer this to the devas and landlords of this place and this country.

For whatever activities are done, please accomplish the necessary conditions exactly as they are wished for without being jealous and angry.

Think that they fully accepted your request.

By the power of my wish
And the power of the blessings of the Tathagatas,
The power of the dharmadhatu (the sphere of existence),
May all the activities that are wished for be received immediately without any resistance.

Now, ask them to stop the rain, or to not make rain.

To stop rainfall, recite, “NAGA RADZA,” “Stop the rain!” Recite many malas of this. Especially after each mala, blow over salt and tsampa, then put them on the fire to make smoke. Then, give orders to the landlord by offering torma to the landlord. (This is included in the same sadhana practice Sur, Aroma Charity to Spirits).

The very first time, you need to recite ten malas. After each mala, blow on the salt and tsampa and place them on the fire to make smoke:

It is also mentioned that if you make smoke from musk and snake meat, that also stops rain.

If the rain doesn’t stop, recite:

Mix salt and tsampa, put it in your mouth and blow it in the direction the rain is coming from. Do this as you are able.

It’s very important to continuously have smoke by burning salt and tsampa either on charcoal or on a wood fire. Using this and the previous method, you must continue the smoke offering for several hours.

1 The practice of Sur (Aroma Charity for Spirits) is a form of smoke offering using roasted barley flour and other substances. Details of the twenty-five substances referred to here can be found in that text. Sur can be found in the practice text, Practices to Benefit Pretas, Nagas, and Spirits available from the FPMT Foundation Store.  [Return to text]

Tathagata Many Jewels (RINCHEN MANG LA): Spirits and all other sentient beings are released from their disturbing thoughts, such as miserliness, as well as their negative karma and its result, such as poverty, and they enjoy with satisfaction whatever they desire. Each of the six realms’ beings receive whatever they need, skies of enjoyments, and they are fully satisfied. Those in the hot hells get rain; those in the cold hells get sun and warmth; animals get protection; hungry ghosts get food; humans get mountains of millions of dollars; asuras get protection from wars, etc.

Holy Beautiful Form (ZUG DZÄ DAM PA): All beings are freed from their miserable bodies, and acquire perfect, strong bodies. Pretas are unbelievably ugly; through this, they receive perfect bodies.

Very Gentle Body (KU JAM LÄ): All beings are released from all physical illness, and enjoy the supreme taste. This pacifies the sufferings of body and mind; all defilements are purified, and bodhicitta is generated in the hearts of all beings of the six realms.

Victorious One Free of All Fears (GYÄL WA THUG JIG PA THAM CHÄ DANG DRÄL WA): All beings are liberated from the fear of being tormented by others and enjoy peace. Think that sentient beings who have less power and are controlled by others, who have fear of danger and sufferings, are made safe; those dangers are pacified. They are liberated from all dangers and powerlessness. This includes animals that are in danger from others. When you see an animal being attacked by others (such as insects, other animals, or humans), then recite this Buddha’s name and it has the power to affect that.  [Return to text]