How to Meditate on the Refuge and Bodhicitta Prayer

This meditation on the refuge and bodhicitta prayer includes commentary on the three principal aspects of the path, the very heart of the lamrim. The advice was originally composed by Lama Zopa Rinpoche for a student with a rare neurological disease who had requested the bodhisattva vows; refuge being the necessary foundation for receiving the vows. Dictated to Ven. Sarah Thresher at Tushita Meditation Centre, Dharamsala, India, on May 6, 2012. Edited by Ven. Sarah Thresher. You can read Rinpoche's long letter to the student here.

You can also watch FPMT's videos How to meditate on the refuge and bodhicitta verse and Become the refuge, teachings by Lama Zopa Rinpoche at the Light of the Path retreat, in Raleigh, NC, USA. Access all FPMT media resources here. 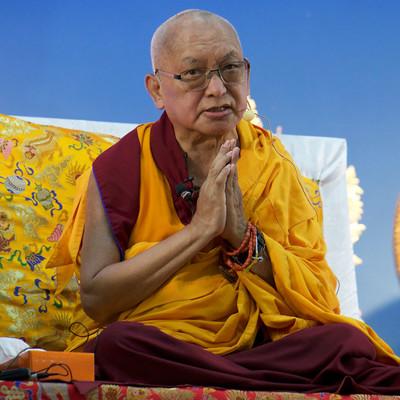 I go for refuge to Buddha, Dharma and Sangha
Until enlightenment is achieved.
Due to the merits from giving and the other perfections,
May I achieve enlightenment in order to benefit the transmigrating beings.

Here is the meditation to be done with this prayer for taking refuge and generating bodhicitta.

First generate renunciation to your own suffering

I myself have been experiencing the oceans of samsaric suffering from beginningless rebirth.

Think of the sufferings of the animals: being eaten by one another, being stupid and ignorant, experiencing heat and cold, hunger and thirst, and being exploited and used for work.

Think how humans suffer from birth, aging, sickness, death, being separated from the pleasant, meeting with the unpleasant, constantly seeking desirable objects but never receiving any satisfaction from them and the suffering of having deluded aggregates.

[In this way] try to get some feeling of how you yourself have been suffering since beginningless time.

Next generate compassion for the suffering of others

Then think of all the hungry ghosts,

Now think of the animals. Can you imagine even one animal experiencing all this suffering? How can you stand even a second not being able to liberate that animal and bring it to enlightenment? But there are numberless animals who have been experiencing the general sufferings of samsara and the particular sufferings of the lower realms since beginningless time and if they are not liberated they will have to experience these sufferings endlessly. Wow, wow, wow.

Now, numberless suras and numberless asuras—wow, wow, wow—have been experiencing the general sufferings of samsara and particularly the lower realms’ suffering since beginningless rebirth and if they are not liberated they will have to experience all these general and particular sufferings endlessly.

The three causes of Mahayana refuge

I must liberate all these numberless sentient beings from the oceans of samsaric suffering and its causes, karma and delusion. Therefore, I wholeheartedly go for refuge to Buddha, Dharma and Sangha.

The first [line of the prayer] shows causal refuge,

I go for refuge to Buddha, Dharma and Sangha.

This is taking refuge in Buddha, Dharma and Sangha possessed by others’ minds.

Until enlightenment is achieved.

[When you are generating bodhicitta, put together all the merits of yourself and all the buddhas, bodhisattvas and sentient beings and say,]

Due to all the past, present and future merits collected by me, by the sentient beings and by all the buddhas,
May I achieve full enlightenment in order to benefit the transmigrating beings.

The meaning of "in order to benefit”

Here, when you say “in order to benefit” it has two meanings. The first meaning is,

In order to liberate the numberless transmigrating beings, the numberless hell beings, hungry ghosts, animals, humans, suras, asuras and intermediate state beings. In order to free them from the oceans of samsaric suffering—the sufferings of the upper realms and the lower realms—and the causes of suffering, karma and delusions.

I can’t wait even a minute or a second to liberate the transmigrating beings who have been experiencing the oceans of suffering of the hell realms, hungry ghosts, animals, human beings, suras, asuras and intermediate state from beginningless rebirth.

Then, the second meaning of “in order to benefit” is,

In order to bring them to full enlightenment.

Therefore think that you will bring the numberless hell beings, hungry ghosts, animals, humans, suras, asuras and intermediate state beings to enlightenment without even a second’s delay.

The meaning of “transmigrating being”

Meditating on emptiness while generating bodhictta

While you are generating bodhicitta,

May I achieve full enlightenment in order to benefit the transmigrating beings.

Meditate on emptiness by thinking,

If you think of emptiness (tong pa nyi) while you are generating bodhicitta, then you will have generated renunciation, bodhicitta and emptiness—all the three principal aspects of the path—while doing the prayer for taking refuge and generating bodhicitta. The Buddha gave more than a hundred volumes of teachings (Kangyur) and the pandits gave more than two hundred volumes of teachings (Tengyur). The three baskets of teachings of the Lesser Vehicle, Mahayana Paramitayana and Mahayana Secret Mantra are all included in the lamrim, in the paths of the lower, middle and higher capable beings and all three of these paths are embodied in the teachings of the three principal aspects of the path. Therefore, by integrating these three principal aspects into the refuge and bodhicitta prayer you will be practicing the very heart of the whole entire Buddhist path.

Put your hands together when generating bodhicitta

Generally when reciting this prayer, people can put their hands together at the heart in the form of prostration, cupped as though holding a wish-granting jewel. However in my case, for example, when I was in hospital I couldn’t use both hands. I could put my left hand up and since I couldn’t bend the fingers of my right hand I just rested it against the left hand. I felt at a disadvantage because I couldn’t do a full prostration like before. Putting the palms together at the heart means prostrating to Buddha, Dharma and Sangha and meditating on generating bodhicitta.

The merit of generating bodhicitta

Each time we generate bodhicitta by putting our palms together at the heart, the merit we collect is amazing and unbelievable. Lama Atisha in the Light of the Path quotes the Sutra Requested by Viradatta,

Even if you were to offer to the Buddha for eons
Buddha fields equaling the sand grains of the Ganga
Filled with jewels,

Putting your palms together
And generating the thought of bodhicitta,
Collects far greater merit.

It means that the merit of offering an unimaginable number of buddha fields filled with the seven types of jewels to the Buddha is unbelievable and unimaginable, but putting the palms together and simply generating the bodhicitta thought, “May I achieve enlightenment in order to benefit the transmigrating beings” collects far greater merit.

Meditating on emptiness at the end of the prayer

If you are unable to meditate on emptiness while generating bodhicitta, then when you finish the prayer you can think,

This is based on the advice of the highly learned and accomplished lama Je Drubkhangpa.