How to Make Actions Virtuous

Kyabje Lama Zopa Rinpoche explains how all our actions can become virtuous and we can accumulate merit, during an oral transmission of the nyung-nä text at the 17th Kopan Course in 1984.

This is an edited excerpt from Section Three of the course. Click here to read more of the unedited lecture. 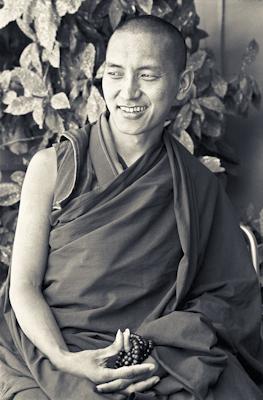 Our virtuous actions and good karma, such as prostrations and the practice of mandala offerings become merit or virtue, as long as they are offered to Buddha. Even if we make the offerings with worldly concern and without Dharma motive, without bodhicitta motivation, the actions become virtuous. If we make offerings completely with worldly concern, without depending on a virtuous Dharma motive—if we make offerings for reputation, or to be wealthy or healthy in this life, or if we are under the force of somebody—as long as we think about Buddha when we make the offerings, the actions become merit or virtue. Even if there is no statue and no material holy object, if we remember Buddha, then any of these actions, such as prostrations and offerings, become merit or virtue. Even throwing some grain or flowers at a stupa while thinking about Buddha, becomes merit or virtue.

If an altar creates confusion and displeases others in the family, we don’t need to have the objects of the Triple Gem in our house. If an altar becomes disturbing for others we can cover it, and even if we don’t have any pictures or statues, we can still make offerings. If we are giving food and tea to the people in our family, either we visualize them as Buddha or we visualize Buddha at their heart. Instead of the person, we think about Buddha, and then we think about offering. Whether we are serving tea or food or whatever it is, even if we don’t have a particular altar—if that is kind of funny-looking—there are so many ways to make offerings. If we know how to practice Dharma, whatever we do from morning until night, without changing our activities, these actions can become virtue.

Generally, for any actions that we do to become virtue, it depends on having a virtuous motive, but there are some actions that are exceptional. Manjushri advised Lama Tsongkhapa that most actions become the cause of samsara, except for some exceptional actions. If we don’t have the realizations of the three principals of the path to enlightenment—if we don’t have at least the renunciation of samsara, or the realization of bodhicitta or shunyata, then, most of our actions become the cause of samsara, except for some exceptional actions. That means actions such as prostrations, making offerings to Buddha and even looking at paintings of Buddha on the wall, become purification. Just looking at thangkas and statues becomes purification. It is said in the sutra teachings that even if we look at the drawings of buddhas on the wall with anger, this still becomes the cause to eventually see ten million buddhas.

There is a story about the arhat Shariputra, who was always with Guru Shakyamuni Buddha, serving him and receiving teachings from him. He was able to be with Guru Shakyamuni all the time, receiving teachings and offering service, because a long time ago in a past life he saw a Buddha image on the wall. When he was traveling, one night he stopped at a temple. He had a light in front of him and while he was fixing his shoes, he saw a painting of Buddha on the wall. It was so wonderful that he got a strong wish to become like that, as he looked at the painting of Buddha again and again. From that cause he became Guru Shakyamuni’s disciple, and he was able to receive teachings and offer service. The cause was so small, but the result was unbelievable.

If we have food or tea on the table, or whatever it is, either at our heart or in front of us, think, “I am offering this to the Buddha.” As simple as that, although the motive is completely worldly concern, just by thinking “Buddha” these actions become exceptional and virtuous by the power of the holy object. Therefore, these actions, such as making offerings or prostrations to Buddha, all become the cause of enlightenment. Every single one of these actions becomes the cause to achieve liberation and enlightenment. Besides all the samsaric perfections and happiness that we can enjoy for many hundreds of lifetimes while we are in samsara, each offering has about eight or ten condensed benefits, as it is explained in the sutra teachings.

With mandalas, prostrations and offering practices, there is no betrayal or cheating. If we don’t do the actions, we don’t experience the result. As long as the work is done, as long as the action is done, it is definite that we will experience the result. It is definite that it brings the result of happiness, just as planting corn definitely brings the result of corn, not bananas. Like this, happiness is definite and unbetrayable. However many eons it takes, it doesn’t get wasted or lost, and therefore receiving a good result, happiness, is definite—it is one hundred percent reliable.

We can accumulate merit very simply, even just with water or by visualization. As much as we want to accumulate the cause of happiness, from morning until night we have the freedom and the opportunity, unless from our own side we don’t practice virtue. So therefore, by knowing the teachings on karma and relating this to our own life and the lives of others, we can understand that with these methods we can accumulate extensive merit, by great virtuous actions or even small ones, such as making charity to an ant.

We can accumulate even a little merit by giving two or three grains of rice and making charity to an ant, or to creatures like birds or dogs, or by speaking nice words to another person to make them happy. In any actions that we do, if we find any possibility to accumulate any great or small merit, we should try. Even if it is small, we should try and we shouldn’t feel careless. Because we want even a little comfort and happiness, it is important to create even a little merit. By knowing the lam-rim teachings more and more, whatever actions we do—whether living in the city or living with our family—there is always the possibility of accumulating merit.