This teaching was bestowed as instruction to many disciples who went to study the Dharma, by the possessor of learning, the abbot Achos Rinpoche, the invisible hidden great yogi who, when near to passing away into the sorrowless state, left in a rainbow body.

The heart advice and commentary are also available from FPMT as a pdf booklet. 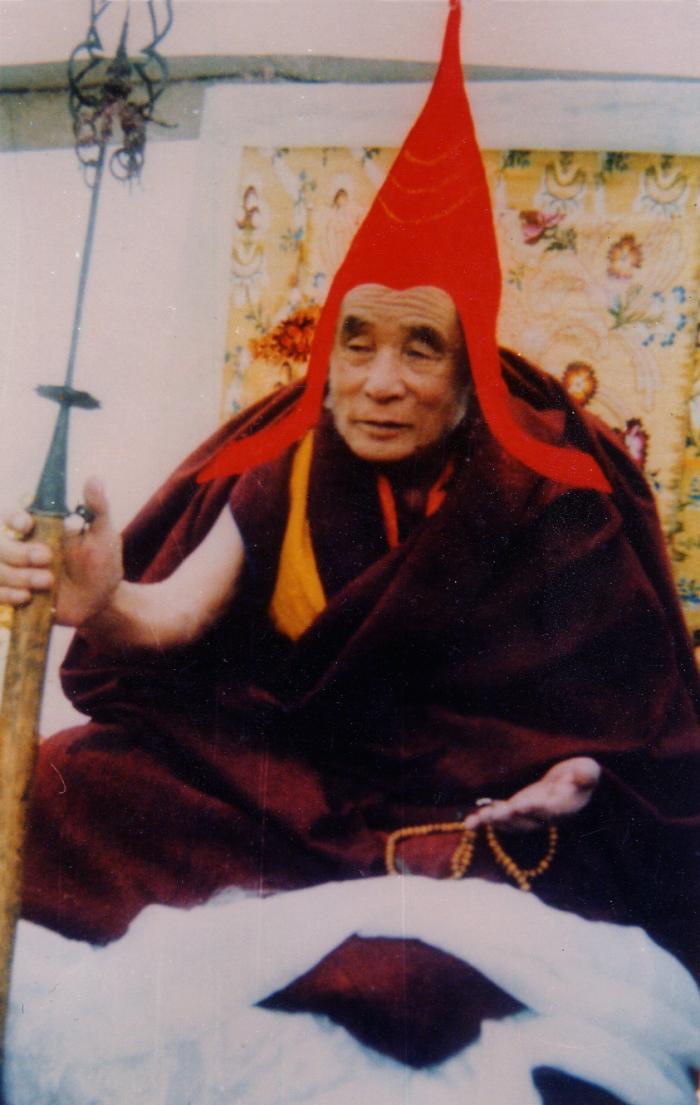 I reverently prostrate to the perfect gurus and to all the victorious ones, and offer a few meaningful words to you disciples who traverse great distances. From the pure karma collected in the past and by pure prayer you have achieved the freedoms and endowments [of the perfect human rebirth] and reached the holy seat, the place of origin of the Buddha’s teaching. Guided by the holy virtuous friend, and so forth, you have all the inner and outer conditions gathered in having this precious opportunity. In order to repay the kindness of His Holiness, who embodies all the objects of refuge, it is worthwhile to attend, listen to, and reflect upon these teachings. Do not cling to this life, which has SMALL BENEFIT AND GREAT DANGER. Always make effort in the divine Dharma, which definitely benefits the entire future.

The Victorious Buddha advised: "Engage in the activities of the three doors for the sake of others, thus one’s own success is achieved along the way.”1 There is no difference between male and female as evil friends [of negative karma], who make you lose this and all future lives.2 Therefore, throw them far away, like a stone used for cleaning your bottom. The virtuous friend and virtuous companion is the originator of qualities, therefore correctly devote and dedicate yourself. Pure morality and great wisdom are the main qualities, therefore you should know them. The great and lesser vehicle is just a way of thinking, therefore do not separate from bodhicitta. If you engage in too much meaningless talk it becomes a basis for fighting, therefore limit your speech. If you create turmoil within a group of the Sangha, then hell is the place you will go to, therefore be careful not to cause disunity among the Sangha. If you become very partisan with regard to doctrinal schools,3 then you collect the negative karma of abandoning the holy Dharma,4 therefore train the mind in pure appearance regarding all the Dharma. If you don’t both memorize the words and reflect on their meaning, it is difficult to become self-disciplined by just hearing the teachings, therefore engage in both. In short, harmonise5 the instructions of your own spiritual teachers and the Buddha’s teachings; this is sufficient [advice]. Other than that, there is no need for further explanation, it is better to let this old monk recite OM MANI PADME HUM. I am here requesting and praying to the three Sublime Ones [Buddha, Dharma, Sangha] for you to have happiness in this and future lives. I offer this as a present to the assemblies who have a karmic connection with me.

This was bestowed as instruction to many disciples who went to study the Dharma, by the possessor of learning, the abbot Achos Rinpoche, the invisible hidden great yogi who, when near to passing away into the sorrowless state, left in a rainbow body.

May all be virtuous and auspicious.

This text was given to the monks and the people who attended the teaching of His Holiness the Dalai Lama (not the teaching at Losar). This advice is an explanation of His Holiness' pure vision. These thoughts can benefit many people, especially as they come from a recent, great, accomplished practitioner who achieved the rainbow body, a very high tantric realization.

This text specifically mentions the great danger of abandoning the Dharma. It is important to understand what this refers to. Examples of this are as follows:

This text presents the very key essential advice about pure morality and wisdom, because without pure morality there is no successful attainment of calm abiding, and without calm abiding there is no great insight; and without great insight there is no direct realization of emptiness that directly ceases the gross and subtle defilements, and without ceasing these defilements there is no achievement of liberation from samsara nor of full enlightenment to enlighten all sentient beings. This complete path to enlightenment includes the tantric practices and realizations as mentioned in Manjugosha Root Text.

This is the wisdom you need—it is Dharma wisdom, not wisdom of how to make chocolate or an atomic bomb! This wisdom arises from reflection and meditation. With this kind of wisdom you can realize emptiness, bodhicitta, and the whole path to liberation or full enlightenment. Correct realization comes from correct practice, and that comes from correct understanding. Computers make life easier, if one knows how to use them, as long as there is electricity or battery power, yet numberless sentient beings have got enlightened without having studied computers. HA, HA, HA!

“A person who has degenerated morality will not gain the supreme attainment. Also, they will not gain the middling attainment or even the final attainment. The Buddha did not say that tantric realizations can be achieved when one has degenerated morality. Such a person will not be able at all to enter the city of the sorrowless state. For this evil child there is no way to achieve tantric realizations. [How is this possible?] For a capable person who has degenerated their morality, how is it possible to migrate to a happy realm? If one can’t achieve higher rebirth, then how can one achieve sublime happiness? There is no need to mention not being able to achieve the realizations of secret mantra taught by the Buddha.”

The solution for having broken pratimoksha vows and degenerated samaya vows is self-initiation. This is the best method. It wipes off all those negative karmas of pratimoksha, bodhisattva and tantric vows. However, to perform self-initiation you need to have done the preliminary highest yoga tantra retreat, and for that the prerequisite is a great initiation.

As far as self-initiation is concerned, there is a long version, a middle version and a short version. The ritual is made shorter by skipping the extensive offerings; you can also skip blessing the vase and so forth. Taking the long version as the basis, you can make it as short as you wish by leaving out certain things. Instead of doing the five types of Buddha initiations one by one, you can do them as a group. Any self-initiation you do involves taking the bodhisattva and tantric vows. So, in this way, you can become pure again. If you do self-initiation every day, especially at the end of the day, you will have a pure life.

Even if the five lay vows of the pratimoksha have been broken completely, they can be taken again. This was taught by the great, enlightened Tibetan lama, Kachen Yeshe Gyeltsen, who is well known for preserving the Vinaya teachings and who, like the sun rising in the world, extensively benefited the teachings and sentient beings in Tibet and wrote vast volumes of texts.

There are different ways of purifying the negative karma (sdik pa) and the pratimoksha downfalls (ltung ba). The negative karma can be purified by those means I have mentioned before. There are six methods of purifying negative karma, as noted in the Lam-rim Chen-mo in the section on karma. The monks’ and nuns’ pratimoksha downfalls are only purified by doing the fortnightly ritual known as so jong (gso sbyong) (the Tibetan term gso means “restore” and sbyong means “purify”).

According to His Holiness Trijang Rinpoche and Zong Rinpoche, for those who have taken 36 vows or full ordination, if one has broken the root vows, and if one feels unbelievable regret for having done that, to the point where it is so unbearable that it is almost like going mad, for someone like that, who has such strong renunciation, they are granted ordination again. This is not according to all the lamas, only some lamas. Of course, one should not pretend, and if some people, because I have said this, who don’t have that quality I mentioned of unbearableness in the mind, almost like going crazy, pretend to be on the outside, and seek ordination, then ordination cannot be granted.

1 This implies that if we use the three doors just for the purpose of achieving happiness for yourself, not only can it not be achieved, but the happiness of others cannot be accomplished either. This is similar to the advice given by Shantideva on the benefits of the awakening mind. [Return to text]

2 Not only does it waste this life, it makes us unable to achieve the temporary happiness of future lives, as well as the ultimate happiness that is the liberation from samsara and full enlightenment. [Return to text]

3 The Hinayana, Mahayana and Vajrayana systems, as well as the four schools of Tibetan Buddhism. [Return to text]

4 Abandoning the Dharma means renouncing from the heart any teaching given by the Buddha. Refer to Rinpoche’s commentary above. [Return to text]

5 Check that our teachers’ instructions are in accordance with the Buddha’s teachings, to protect us from mistaken or inappropriate instructions. [Return to text]