Give up This Life

In this teaching excerpt, Lama Zopa Rinpoche discusses the great Kadampa master, Dromtönpa, who completely abandoned all worldly activities and devoted himself correctly to his guru, Lama Atisha. The excerpt is from a series of ten discourses given by Rinpoche from February 16–25, 1990, at Root Institute, Bodhgaya, India, as part of the Third Enlightened Experience Celebration (EEC3). Edited by Ven. Ailsa Cameron and Ven. Robina Courtin.

The Bodhgaya teachings are based on the fifteenth century Kadampa mind training text, Opening the Door of Dharma, by the Tibetan yogi Lodro Gyaltsen, and form the basis of Rinpoche’s book The Door to Satisfaction, published by Wisdom Publications. 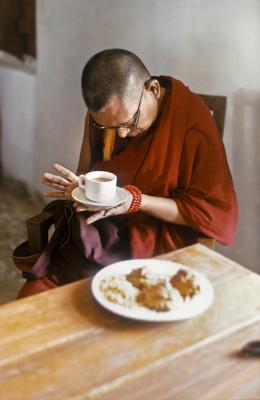 Dromtönpa, Lama Atisha’s translator, was born to the north of Lhasa, quite near to Tolung, where Lama Yeshe was born. This is the holy place where Lama Tsongkhapa saw Guhyasamaja and Mahakala. I gave a Chenrezig initiation there during a pilgrimage to Tibet in 1987. This is also the place where Lower Tantric College monks took examinations, received commentaries on tantric root texts from their abbot and practiced chanting. It seems that, quite close to here, Dromtönpa was born.

Tara prophesied the birth of Dromtönpa, who was an embodiment of Chenrezig. Tara predicted that Dromtönpa would be a holder of the Buddhadharma whose holy mind would be enriched with infinite qualities of scriptural understanding and realizations and who would see inconceivable numbers of deities.

Before coming to Central Tibet and becoming Lama Atisha’s translator, Dromtönpa lived in Kham and was the disciple-servant of Lama Setsuen. After meeting Lama Atisha, Dromtönpa asked him what the best Dharma practice had been out of all the things he, Dromtönpa, had done. He told Lama Atisha about his various practices. He also explained how hard he had worked for Lama Setsuen. At night, armed, he guarded all the lama’s animals. During the daytime, he did many other things. He made all the fires. The lama’s wife used Dromtönpa as a chair to sit on while she milked the cows. While Dromtönpa was using his hands to spin yarn, his feet would be working butter into dried animal skins to make them pliable. At the same time, he would also be carrying something on his back. For many years, he worked like this—doing many things at the same time. Dromtönpa explained all this to Lama Atisha, who said, “Of all the things you have done, your hard work for Lama Setsuen has been the real Dharma.”

Dromtönpa devoted himself correctly to Lama Atisha for seventeen years. After Dromtonpa met Lama Atisha, he never left Lama Atisha in the dark at night: every night he offered a butter lamp in Lama Atisha’s room.

The lineage of the Kadampa geshes actually starts with Dromtönpa. Amongst his many disciples, Dromtönpa had three great sons, or chief disciples—Geshe Potowa, Geshe Chengawa and Geshe Phuchungwa—who were holders of the Buddhadharma, with infinite realizations. After he established Reting Monastery in 1057, Dromtönpa lived another seven years, living a total of fifty-one years.

Dromtönpa was not a monk but a lay person living in the five precepts. When visualizing the lineage lamas of the lamrim, you visualize Dromtönpa as a Tibetan nomad wearing a very warm, blue chuba lined with animal skin.

Dromtönpa always wore very old, torn clothes. Throwing the sleeves of his chuba over his shoulders, he would sometimes go off into the juniper forest. By putting two or three poles together and covering them with animal-hair cloth as Tibetan nomads do, Dromtönpa would make a small shelter and meditate inside.

While walking through the forest, Dromtönpa would sometimes recite this verse from Nagarjuna’s Letter to a Friend:

He would also recite from A Guide to the Bodhisattva’s Way of Life, saying: “I am a seeker of liberation. I don’t need to be bound by the receiving of material and respect.” Sometimes he would recite the complete quote; at other times he would just begin the quotation. While he was reciting this he would shake his head, indicating that he didn’t need to be bound by receiving material and respect.

Other Kadampa geshes would say, “For himself, Dromtönpa doesn’t need to lead an ascetic life; he does this for the disciples who follow him.” Dromtönpa, who had abandoned all worldly activities, was once invited to a place called Rong to give money offerings to the monks during puja. He called one of his disciples, Pelgye Wangchuk, and said to him, “You go this time—I can’t. I am here trying to give up this life.”

Seeing a monk circumambulating a monastery one day, Dromtönpa called to him, “It is good to circumambulate, but it would be better to practice Dharma.” The monk thought, "Maybe it’s better to do prostrations.”

When he saw the monk prostrating, Dromtönpa said to him, “It is good that you are doing prostrations, but it would be better to practice Dharma.” When the monk tried reciting prayers and meditating, Dromtönpa again said the same thing.

Finally the monk asked Dromtönpa, “Then, what should I do?”