Freedom worth more than skies of gold, diamonds and sapphires (2011)

This unedited transcript is an excerpt from extensive Golden Light Sutra weekend teachings given by Lama Zopa Rinpoche in San Jose, California in March 2011. In this excerpt, Rinpoche encourages us to take advantage of this precious and rare opportunity to study the profound meaning of emptiness. These teachings were hosted by Gyalwa Gyatso Center, San Jose, and were attended by many FPMT Sangha including LYWA’s own dear Venerable Kunsang. You can also watch Rinpoche give this teaching. 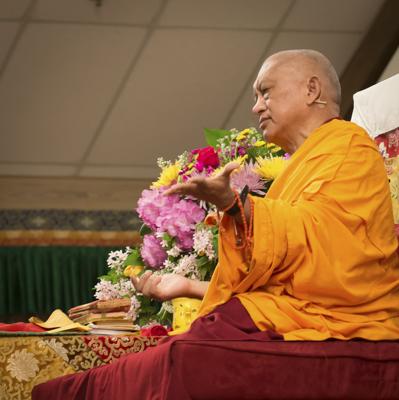 [Students recite in English: A star, a visual aberration, a flame of a lamp, an illusion, a drop of dew or a bubble, a dream, a flash of lightning, a cloud, see causative phenomena as such.]

Think of one's own view, view of one’s mind, the I, action, object, form, sound, smell, taste, tangible object, so that view, how they appear to you and how you, which way you've been believing. That they are empty, that all these phenomena are empty of existence from its side, that they all exist in mere name, merely imputed by the mind. Or they are all, including the I, external object, all the phenomena, are existing from their own side.

Having this total opposite view, totally opposite view then what they are, how they exist, stem from the I, self, and action, object, all the phenomena. Enlightenment, hell, enlightenment, samsara, nirvana, happiness, problems, so that’s it.

What projected, hallucination projected by the ignorance, by relate our mind to use, we are using our mind to, wrong way, wrong believe, believing that they are all right, that they are truly, that they are all correct view. This I is real true, this action is real true, everything is true, what is projected as something real by the ignorance, we let our mind to, on top of that, on top of what ignorance projected hallucination, then we let our mind one hundred percent believe that true, that is the root of samsara. That the basis to arise attachment, anger, ignorance, jealous mind, pride and all that, those five, six delusions, the 22 secondary delusions and so forth, and 84,000 delusions branches, however there, from the ignorance and attachment.

The biggest mistake, root mistake, biggest mistake in our way of thinking, in our concept, biggest mistake. While I, action, object, while samsara, nirvana, hell, enlightenment, happiness, problems, while everything totally, while the whole entire life is totally empty from its own side, we think the projections, hallucinations truly existent appearance there, they are projected by ignorance, on the merely labeled I, merely labeled aggregates. The way we think, that is one hundred percent true.

There is all the sufferings of rebirth are outlined in the five by Lama Tsongkhapa, in sutra. There are so many things in life after you are born, there are so many things in life that you forgot, but then your friend, your parents, other people can remember what you did, then you have to negate, you have to say all those didn’t happen because you don’t remember. So that is foolish, you see. So exactly same, suffering rebirth means happen even though you don’t remember, so that similar, I am just using that as a reason that how that foolish is similar saying that human rebirth is no suffering because you don’t remember. That you don’t remember, you don’t see it, can’t use that, doesn’t become logic, doesn’t become logic to prove it, that human rebirth doesn’t have suffering.

Certainly holy beings and those who are free from, those who are liberated from the sufferings of samsara, by ceasing cause, karma and delusions, those mental factors, karma and delusions, which causes rebirth, that suffering. Whoever has ceased totally that, then even though they manifest taking rebirth but they don’t experience suffering. Similar the mother when they give birth to the holy beings, when they give birth, realized the holy beings, they don’t experience pain, birth, sorry I said birth, birth, they don’t experience pain. Even from the story, some incarnated lama's birth, the mother tell didn’t have pain at all, very easy like that. General, then it's unbelievable pain, many mother has experienced. Even from story, what I heard was like that, because of this, Yangsi Rinpoche who started the college, his mother told me that never had pain at all, very, very easy. Even the mother’s side, different experience for different children's birth. So the effect of that being's mind, the holy mind, or realized or whatever, the holy mind, the realized mind or things that, so doesn’t caused pain to the mother.

Like you go by aeroplane, go up by aeroplane then you come out in the sky, you come out from the sky; not from the sky, sorry, from the aeroplane. I think you have trekking bag on your back side or I am not sure. Each person carries trekking bag. Parachute, not trekking bag. [Laughter] Backpack, backpack. I don’t carry backpack you know. Anyway each person holding hands, each person hold their hands in the sky, sometimes one person drops down, I see some, one person fall down, the way down, way down, but then didn’t show, they drop on ground into, but didn’t show. Anyway like that, all these for getting satisfaction, to try all kind of things in life to get satisfaction.

Another person used as a bullet, I don’t how, from another ground, they shoot as a bullet, inside a person. Person used as bullet, from somewhere, shoot another place, bullet is person, I saw that. [Laughter] In another mission, somewhere shot, shoot, but is person, but is a man, to some other place. Between that is crack, between the ground, big crack. Then like, what do you call [Tibetan], bat, you put wings, make wings, you tie with their arms, then you run with the wings, you run, then sometime you fell down, injured, on top of the hill, you run to fly. So anyway.

Student: There were twenty-five people who applied and he chose that one person. And he was cut into pieces and put into a refrigerator and then he ate him gradually. When they found it, there was just a little bit left in the fridge, haven’t quite finished.

Student: Applied to eat him.

Rinpoche: Oh I see, so twenty-five applied to eat him, to eat his body, but he chose this particular person, so cut his body into pieces, put in refrigerator, with creams of top of that. I am joking, I didn’t hear creams on that. Maybe with peanut butter. [Laughter] Anyway I am joking, sorry.

So this subject, what I want to say is one way, that. So the karma. So therefore you see in the teachings of sutra and tantra, the teaching of karma is how that emphasize so strongly that. Very careful in the karma, even a small negative karma, one has to be very careful, must abandon as much as possible.

Must study those teachings, not only being scholar in the words of the teachings, but must protect karma, must abandon the cause of suffering, the negative karma. If it is small, then practice it even if it is small virtue as much as possible.

But if you have this, even if you don’t have skies of diamond, gold and all the things, but you can achieve, can practice secret mantra Vajrayana and achieve enlightenment in one lifetime. So think that. Therefore this freedom is much more precious, unbelievable precious than the sky filled with gold, diamond all those. So that.