Kyabje Lama Zopa Rinpoche gave this teaching on karma at Kopan Course No. 15, held at Kopan Monastery, Nepal, in November 1982. This is an excerpt from Section Six of the course. Lightly edited by Sandra Smith. 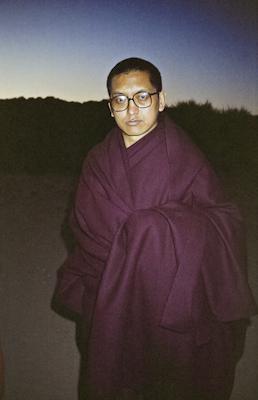 There are four outlines of karma: karma is expandable, karma will definitely bring its result if it is not destroyed, we cannot experience the result of karma that we have not created, and the karma that we have created never gets lost.

If a seed planted in the ground is left without water it becomes completely dry or if it is burnt by fire it is completely destroyed, but as long as the seed doesn’t meet these hindrances, or as long as it is not rotten, then it is definitely going to bring its own result; it never gets lost.

When we practice thought training, experiencing problems becomes a cause for finishing the results of negative karma. When we remember that karma is expandable, there is more feeling and more happiness. The result is that more happiness comes in the mind. Even with external things, for example, planting one rice seed, so many grains of rice come as a result. So many fruits can come from such a small seed. One small seed can grow into an incredibly huge tree with many branches and so many fruits that come later. But our inner karma is so much more expandable.

I’ll give just one example of how we experience such an incredible suffering result from one small negative karma and how we experience unbelievably good results from one small virtuous action. In the past in India, a person got angry. I don’t remember exactly what made him angry, but there was a bhikshu crossing a stream and then another person in anger gave him a nickname. He criticized him, saying, “You jumped, you are like a monkey.” He criticized the monk with a bad attitude, and due to the small negative karma of criticizing the monk, that person had to be reborn as a monkey in five hundred lifetimes.

An example of a virtuous action is when Guru Shakyamuni Buddha was going for alms in a valley, and there were three children playing on the sandy ground on the road. As Guru Shakyamuni Buddha came along, these three children wanted to make offerings to him, but Guru Shakyamuni Buddha was so tall that their arms couldn’t reach up to make offerings into his begging bowl. So, this is how these three children managed: one child stood on the shoulders of another child and then another child stood on his shoulders, like in the circus. They didn’t have anything to offer, so they offered handfuls of sand grains while visualizing that they were offering gold into Guru Shakyamuni Buddha’s begging bowl. Due to that one small virtuous action of offering sand visualized as gold, one child was born in his next life as the Dharma king of India, the king Ashoka. In one day Ashoka was able to build in so many different places (I don’t remember one hundred per cent), ten hundred thousand or one million stupas. He was also able to build many monasteries and make many offerings to the Sangha. Due to that small virtuous action, he was able to accumulate so much more merit in his next life. This is just discussing the temporary results.

So you see, in many lifetimes we have to experience the result of even one small negative karma, for example, giving somebody a nickname in anger or blindly criticizing others for this or that. If it is a powerful karma we start experiencing its result even in this life; after one month, one year or after some years, or even the next day or in an hour. It depends how powerful the action is.

Even in this life we give so much harm just with words; we hurt sentient beings so much. And not only this, but negative karmas have been accumulating in past lives as well, from beginningless rebirths. Some of the results of the negative karma are finished and some are half-finished; we have still not finished experiencing them. There are many results of negative karma that we have not yet experienced at all. There are uncountable numbers of those.

Remember that karma is expandable, relating it to examples like the karmic stories of sentient beings, explained by Shakyamuni Buddha to sentient beings in the sutra teachings. What Guru Shakyamuni said has been recorded in many of these karmic stories in the sutra teachings. Most of the stories, particularly the unimaginable ones, the peculiar and amazing ones about sufferings that you cannot imagine, were recorded on purpose. It is similar with those actions with incredibly good results. You can’t imagine how it is possible that so much good can come from such a small action.

The sutra teachings explain things that people usually cannot imagine, cannot figure out. It is purposely recorded there, not just saying that from good karma comes good results and happiness, while from negative karma comes sufferings; besides this they give more detailed descriptions.

We don’t have clairvoyance to remember all our past lives or see all our future lives, nor can we understand the karma of others, for example, why each sentient being has different experiences. Those who are incredibly wealthy have one type of experience; they experience so much enjoyment of happiness and perfections. There are other sentient beings who have unbelievable problems that you cannot imagine.

At the airports, at the train stations or in the city bookshops, especially in the West, they sell many books that give one person’s life story from beginning to end. There are thousands and thousands of pages all about suffering. Even between one couple, for example, it is unbelievable how many problems and how much suffering there is. Just listening to all the stories of the boyfriend’s or the husband’s life, the whole biography, as well as the whole life story of the wife or girlfriend, is incredible.

After they met, while they are staying together, there is so much unbelievable pain and fighting. They do so many undesirable things to each other, experiencing so much pain of the heart. Then, after a while that man leaves, he drops out. The first man drops out; he gives up and runs away with somebody else. Then she meets somebody else and again similar problems start, completely opposite to what she expected in the beginning. Again, there is no more interest, so again she tries to find another one. Maybe she is physically living with one man but at the same time she is trying to find another one. She has hidden him somewhere at the house, not telling him. Then one day, he somehow finds out, somebody tells him or he meets the person that she has kept secretly at the house when he was not there, while he was away. Sooner or later he finds out, then there is a big hassle, the whole sky falls down, sort of. Then they fight, pulling at each other’s hair, or if they are brave they beat each other up. Then she runs away or he runs away.

Like this it goes on and on, over and over again. She says, “How badly this man treated me. He left me with all the children. While there was one child in my womb, there were three or four children outside. There was no money and it was difficult to find a job. I had to move the family because the house was too expensive.”

She thinks many times of committing suicide. At many different times she has been on the point of committing suicide. She has tried to seek much happiness, but nothing happened. She did so much and tried everything, but nothing happened, so the solution is suicide. Living is suffering, so she thinks it’s better to commit suicide. That is the final answer, the solution. Many times she was about to commit suicide by jumping off a bridge or by putting a heater in the bathtub. Heater? Maybe not a kerosene heater. Or she tried to commit suicide with an injection or some other peaceful method, or with a knife, a gun, a rope or whatever.

When we listen to the whole biography of the boyfriend or husband, it is something that makes us cry, it is so painful. It makes us have uncomfortable thoughts and tears come out. There have been so many unbelievable problems, one after another. When we listen to the wife’s or girlfriend’s life story, all the problems, the whole thing, again it is the same thing. It is so very sad, it makes tears come out.

They are so pitiful, but when I listen, for me it is very helpful. For my mind, their life story is so very helpful, so beneficial. It is like listening to teachings on the graduated path to enlightenment about the true cause of suffering. Their confused minds are the true cause of suffering, while their problems—all the worry and fear and all the physical problems—are the true suffering.

There are so many unbelievable books with life stories about what people did, about the bad things they did. It is unbelievable, we can’t imagine it. How is it possible to think the way she thinks, with this attitude of giving harm to others?

All those life stories are teachings on karma. They are similar to the stories on karma explained by Guru Shakyamuni Buddha in the sutra teachings, particularly the ones that normal people cannot imagine, the uncommon ones. Sometimes part of a person’s life story is told, for example, he has so many sons, such-and-such a profession, so much wealth, and this and that; this is talking about his comfort, enjoyment and happiness, the temporary results of virtue.

These stories are very good examples of the three types of suffering; they are teachings on karma if we have the understanding of lam-rim. If we read these books with Dharma understanding, particularly with an understanding of karma and with the thought to practice Dharma, they become incredible teachings that can quickly generate the thought of renouncing samsara, and also of bodhicitta and compassion.

The True Cause of Suffering
Blessings of the Merit Field
How Guru Shakyamuni Buddha Guides Sentient Beings
Kopan Course No. 15 (1982)