The following explanation of the eight auspicious signs was translated by Kyabje Zopa Rinpoche and dictated to Ven. Sarah Thresher at Root Institute, Bodhgaya, India, on February 4, 2014. Edited with the help of Losang Hursthouse.

Note: This advice has also been published in Mandala magazine, July 2014. 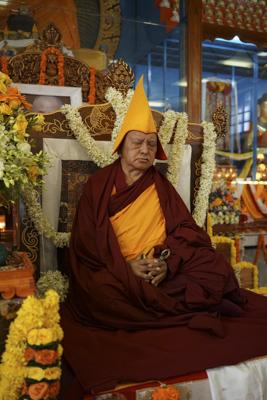 Probably many of us do not know how important these eight auspicious signs are and how they affect our lives. They can be used externally to help for one’s own success as well as for the FPMT organization to be successful in benefiting others and working for the teachings of the Buddha. Putting these eight auspicious signs around everywhere, outside and also inside the rooms makes things very auspicious. It is not necessary to put all eight together and they don’t all need to be in the same place, they can be placed separately at different locations but you should have all of them.

The eight auspicious signs are the

Here is the meaning of these eight auspicious signs according to my Root Guru His Holiness Trijang Dorje Chang’s explanation.2

1. The precious umbrella saves us from all this life’s obstacles—such as sicknesses, contagious diseases, spirit possessions, interferers and so forth—and also from the next life’s obstacles—the sufferings of the three evil-gone-ones,3 of the devas, human beings and so forth. It saves us completely from being tormented by the heat of both temporary and long term sufferings. It has the dependent arising of giving the extended joy of a cooling shadow of peace and happiness.

3. The vase of great treasure is a dependent arising that brings unceasingly all desired things, the fortune of a glorious life, enjoyments and so forth in the three realms of existence (the desire, form and formless realms) and peace (liberation from samsara).

4. The lotus is a dependent arising that frees us from all the stains of mistakes—the non-virtues of body, speech and mind. The abundant blossoming of a hundred petals of white virtue brings an abundance of the good essence of honey—everlasting happiness, definite goodness, (liberation and the state of omniscient mind).

5. The white conch shell swirling clockwise is a dependent arising announcing the sweet melody of the profound and extensive Dharma that fits the elements, level of mind and wishes of sentient beings who are the object to be subdued. It awakens transmigratory beings from the ignorant sleep of unknowing and persuades them to accomplish works for the benefit and happiness of themselves and others.

6. The glorious peu is a dependent arising for Dharma and politics to utilize and support each other in one continuous connection. Like that, at the time of the path, method and wisdom connect by being unified with each other; emptiness and dependent arising are connected in one without contradiction. At the time of the resultant state of Buddha, omniscience and compassion are unified.

7. The banner is a dependent arising for the activities of one’s own three doors and those of others not be stepped upon by obstacles or disharmonious conditions but to be victorious and for the precious teachings of the Buddha to be victorious in the war over the black side, the types of maras.

8. The golden Dharmachakra is a dependent arising for the precious wheel of the holy Dharma, the scriptures and realizations of the Victorious One, to turn unceasingly in the whole universe. In dependence upon that, all those who are reborn and degenerating (samsaric beings who are continually being reborn and dying under the control of karma and delusion) apply themselves to the most glorious virtue, total liberation.

Wherever these eight auspicious signs exist, there will be the dependent arising of increasing the virtue of auspiciousness.

1 Skt. Srivatsa. Rinpoche has not translated this because it is not clear exactly how it should be translated. It is usually referred to as the “unending knot” but this is not the literal meaning of the words. [Return to text]

3 This is a literal translation of ngän-song sum, which means the three lower realms. [Return to text]