Thank you for your interest in the Archive and your generous contributions, which allow us to do what we do, especially publish books for free distribution: there are now over 500,000 in print! Thank you so much!

Books in the New Year

Our next free book, Lama Zopa Rinpoche’s Kadampa Teachings, is being printed right now and will be available next month. As usual, it will be sent with our gratitude to all Members and Benefactors. If you are not a Member or Benefactor, please consider becoming one; make your donation before January 5th 2010 and you'll receive this book later in the month.

Wisdom Publications are also publishing a new book by Lama Zopa Rinpoche, Wholesome Fear, which we will be sending automatically to all our Members free of charge along with Kadampa Teachings. If you are not an LYWA member you can buy it directly from Wisdom Publications. If you become a Member by January 5th we will send you a copy.

Also, due to the generosity of our supporters, we are reprinting Geshe Jampa Tegchok's The Kindness of Others. We won't be sending this out automatically, so if you'd like a copy you can order it from our website in January.

Supporting the Dharma for the Benefit of All
And we especially would like to thank all of you who have contributed to our year-end appeal. We have received $35,000 of the $50,000 we are trying to reach. See here for more details of this appeal. If you have not yet contributed, I urge you to make a donation right now to ensure that we have the funds we need to keep bringing you and all beings the Dharma teachings that we do, in print and on line.

Thank you again. We have several more great books coming out next year so please stay in touch.

New Online Developments
Listen online to teachings on the nyung-nä practice given by Lama Zopa Rinpoche in Taiwan in 2007. The series includes an oral transmission of the nyung-nä text and the long Chenrezig mantra. As usual, you can read along with the unedited transcripts.

We have posted an edited version of the Mahamudra Teachings and Medicine Buddha Teachings that Rinpoche gave in Crestone CO in June 2008. Previously we had posted the audio and unedited transcripts, which you can also access here.

Other News
Our friends at Vajrapani Institute are building a stupa on the site where Lama Yeshe was cremated in 1984. Read all about it here.

With best wishes for Christmas and the New Year, we leave you with an excerpt from our new book Kadampa Teachings.

The Shortcomings of Samsara 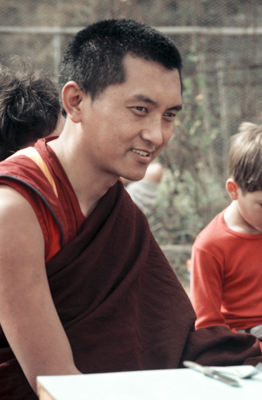 The more we reflect and meditate on these subjects [perfect human rebirth, impermanence, death and karma], the more we feel that the whole of samsara is unbearable. Besides the desire realm, even the form and formless realms are only suffering in nature. The whole of samsara is only suffering in nature. The thought of having to reincarnate again in any of these realms is most disgusting, most terrifying, like jumping into a septic tank. You don’t want to jump into a septic tank, where there are all those smelly, interesting things. You also don’t want to jump into the center of a red-hot fire or into a nest of poisonous snakes. It would be terrifying to do that. You don’t want that for even a moment. Because you know very clearly all the danger, unpleasantness and suffering you would experience, you don’t have the slightest attraction to being in the middle of a septic tank, a fire or a nest of poisonous snakes.

This is true even for the deva realms within the desire, form and formless realms. In the desire realm there’s the suffering of pain, the suffering of change (which means samsaric pleasures) and pervasive compounding suffering, aggregates under the control of karma and delusion. One meaning of pervasive is that the aggregates are the production of the impure cause, karma and delusion, and because of that, it is natural that they are pervaded by suffering. Also, because the aggregates are under the control of karma and delusion, they are suffering in nature. That’s another meaning of pervasive. They are also contaminated by the seed of delusions, which is another meaning of pervasive. Because the seed of delusion is there, mental and physical problems can arise at any time from it. The seed compounds the suffering of this life and also produces delusion, which then produces karma, leaving a karmic seed on the continuity of the sixth consciousness, the mental consciousness; that karmic seed then produces the future rebirth, the future samsara.

The devas of the formless realm, though they don’t have the other two sufferings, do have pervasive compounding suffering. That is the nature of their aggregates. Also, when their karma to be in the formless realm finishes, they have to reincarnate from there in the hell, hungry ghost, animal or some other realm.

When you are born in the form realm, you see the desire realm of human beings as disgusting. No matter how great we think our pleasures are, those who are on the first level of absorption in the form realm see them as completely disgusting. They don’t have any attraction to those pleasures for even a moment. All the pleasures that we think are so great, they see as only suffering. It’s similar to the way we see disease and many other problems in our realm. When we think of Africa or some other place with a lot of contagious diseases and many people dying in epidemics and famines, we have no desire to be there for even a day—or even a minute. We’re afraid of getting those diseases. This is how the beings in the form realm see even the human beings who have great wealth and pleasure. Here we’re not talking about how they see arya beings or meditators who have entered the path and have renunciation of the whole of samsara. We’re just talking about how the gods of the form realm see what we human beings believe to be great pleasure. They see it as totally disgusting and only so much suffering. They’re not attracted to it at all.

Here the important point you have to understand is that even though they had realized renunciation of the desire realm, the form realm and even the first three levels of the formless realm, feeling total aversion to them as disgusting, they again have to reincarnate because they didn’t have renunciation of the tip of samsara, the last level of the formless realm. The point is that because they have no renunciation of that last level, they again reincarnate. Also, they don’t have the wisdom that directly perceives emptiness. To stop reincarnating, you have to cease your delusions and the seeds of delusion, which are of the nature of imprints. To do that you need the wisdom that directly perceives emptiness. If you don’t have that, you again have to reincarnate.

Thinking in this way can help some people to develop renunciation, or detachment.

You then take vows, either lay vows such as the eight precepts or five lay vows or ordination as a monk or nun, with thirty-six or 253 vows. You are very happy to take vows, and you are also very happy to live in those vows. You don’t feel as if you living in a prison. The more analytical meditation you do, the more you discover the suffering nature of samsara and samsaric pleasures, especially the ones to which you are strongly attracted. The more you see that they are suffering, the more aversion to them you have and the stronger your wish to be free from them and achieve liberation. The very basic means to achieve liberation, to be free from this suffering, is by living in vows, either lay vows or the vows of a monk or nun. You are then very happy to do this, because you know that this is the path that protects you. This is your fundamental protection, protecting you from delusions, from negative karma and from all the sufferings of samsara.

The stronger your thought to achieve liberation, the happier your mind is when you’re living in vows. It’s not that anybody is forcing you; it comes from your own heart. It’s as if you are suddenly being released after being in prison for a long time. On the day you’re released you feel so happy. Like this, you feel so happy, day and night, knowing that living in vows is the way to get out of samsara. You’re like somebody who has worked very hard all year and is now going on vacation. After working so hard, you now have time to go skiing in the mountains or on the water. You’re so happy when you have a few days of vacation, but in this case, you’re much happier because you can attain the path and achieve liberation. You can remove the cause of suffering, karma and delusion, and achieve liberation forever. There’s no coming back into suffering.

You need to think of all the shortcomings, all the harm and suffering for you and for others in this life and all the coming future lives, if you engage in unrighteous actions with your body and speech. You then think of all the benefits of eliminating your obstacles and those of others and of achieving the general and sublime attainments.

**Note: For further details see Meditative States in Tibetan Buddhism; Opening the Eye of New Awareness, pp 60–66; or The Great Treatise on the Stages of the Path to Enlightenment, Volume Three, pp. 96-103.

Lama Zopa Rinpoche gave this teaching at Root Institute Bodhgaya, India, 31 December 2006. Edited from the Lama Yeshe Wisdom Archive by Ven Ailsa Cameron and to be published January 2010 in Kadampa Teachings, a free book from the Archive.