Thank you for receiving and reading our monthly e-letter.

First, there’s a great deal of excitement here as we prepare for a last-minute visit to Boston by our precious spiritual director, Lama Zopa Rinpoche. On Friday July 27 he will be signing copies of his new book, Dear Lama Zopa, which contains edited versions of some of his advices from our online Advice Book. He will also be at Kurukulla Center Saturday July 28 for an animal blessing. 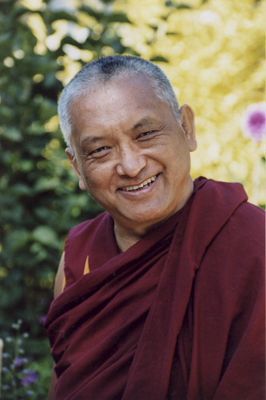 We’re also busy here continuing work on the projects we mentioned in our June e-letter. In addition, we are working with digital imaging specialist David Zinn, who prepared our beautiful Lama Yeshe portraits, to scan and make available thousands of photos, slides and negatives of Lama Yeshe, Lama Zopa Rinpoche, other lamas, and early FPMT places and events. People have very kindly sent us some amazing stuff and we really look forward to sharing them with you via our Web site in due course.

Getting Advice From Rinpoche
Sometimes people write to us wanting to get in touch with our great teacher, Lama Zopa Rinpoche. Recently the FPMT clarified this process on their Web site. Please note, however, that Rinpoche is extremely busy and the time he has to attend to personal correspondence is very limited.

Many of the topics that people often write to Rinpoche about can be found in our online Advice Book, such as questions about various illnesses, how to develop a daily practice, the challenges and benefits of working for the dharma, and more. This month, in honor of Rinpoche's animal blessing event in Boston, we've updated the page on benefitting animals. Also see the page with Rinpoche's advice to avoid killing animals.

We've just finished posting the audio of Rinpoche's lectures during the month-long meditation course from Kopan Monastery in November 1995. 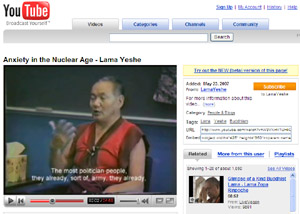 Watch and Listen to Lama Yeshe
We have just posted some Lama Yeshe video clips on YouTube. Please check them out and share them with others. Of course, you can always buy the complete DVD from our online store.

This month's podcast is the 5th chapter from Lama Yeshe's Ego, Attachment and Liberation. It is a series of questions and answers between Lama Yeshe and the students of the 5-day meditation course that this book chronicles. You can listen to this lecture and more on our online recordings page.

Prayer that Spontaneously Fulfills All Wishes
Lama Zopa Rinpoche has recently translated and started using the Prayer that Spontaneously Fulfills All Wishes. This prayer was spontaneously composed by the Dalai Lama when the great Nyingma master Dilgo Khyentse Rinpoche requested a prayer that he could recite daily for the fulfillment of His Holiness’s holy wishes. Rinpoche has translated this prayer and made it available for all of us to recite. It is available for download on the Essential Buddhist Prayers update page.

It has been formatted two to a page to make for easy copying and insertion into the prayer books.

Transforming stock into Dharma
At this time of record market highs we thought you might like to take advantage of the tax benefits of donating stock directly to the Archive. For example, if you wanted to donate $10,000 to LYWA by selling stock first, you’d have to sell around $13,000-14,000 and then donate what was left after tax. By directly giving us stock worth $10,000 you’d be able to claim a deduction for $10,000 without having to sell more than that amount.

Thank you again for your kind interest and support. This month we leave you with a teaching on compassion by Lama Zopa Rinpoche. Next month I’ll be in retreat so the next e-letter will come to you in September. 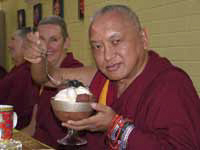 The power of compassion

All beings, we humans and even the tiniest creatures that can be seen only through a microscope, are exactly the same in wanting happiness and not wanting suffering, or problems. It doesn’t matter whether we are from the East or the West or from another planet—we are exactly the same in this. It is for this reason that practice of the good heart, of compassion, is the most important thing in our everyday life.

First of all, no matter how many friends we have—even hundreds or thousands of them—if we don’t have a warm, kind heart, there’s no satisfaction or peace of mind in our everyday life. As we need friends, we also need to develop our mind, especially our compassion. Compassion, which is the essence of the right path, brings the greatest benefit to us and to all other beings.

Without compassion, even if we find a friend, that friend can become our enemy. It depends on our attitude in everyday life, on whether our mind is compassionate in nature or self-centered, thinking about nothing but ourselves and our own happiness day and night.

If we have compassion, we have better, more harmonious relationships and more peace. With compassion, everyone becomes our friend. Wherever we go and whomever we live with, everyone becomes our friend. We find friends everywhere. If we have compassion, even someone who is normally cruel and selfish is kind to us. That’s a result of our compassion. It is a common experience that even someone who is normally mean to others is kind to a person who is warm-hearted, who is kind, loving, and compassionate, with much concern for others.

Take my teacher, Lama Yeshe, for example. Many people here knew or know about Lama Yeshe. Those of you who didn’t meet him might have heard about him. Lama Yeshe saw everyone as very kind. From my observation, because of Lama’s own good heart, other people also became kind and good-hearted. The other person’s mind was also transformed or, in other words, blessed. Blessed means their mind was transformed from a negative attitude into a positive one, from a selfish, cruel mind into a kind mind.

Another example is the famous Italian saint, St. Francis of Assisi. I think St. Francis lived at the same time as the great Tibetan yogi, Milarepa, who achieved full enlightenment within a few years by meditating in hermitages in the Himalayan mountains according to the instructions of his guru, Marpa.

At that time, in a forest in Italy, there lived a dangerous wolf that had harmed and killed many people. St. Francis told the local people, “Don’t worry about the wolf. I’ll go into the forest and ask him not to harm anyone.”

The people begged St. Francis not to go into the forest because the wolf would attack him, but he went anyway. When the wolf saw St. Francis, it immediately became subdued. It was completely transformed, or blessed. Instead of attacking St. Francis, the wolf licked his feet. It behaved the way a dog does with its master, showing humility and affection.

There are many other such stories of human beings who were exactly the same as we are, with all the problems that we have, but who put effort into developing their mind and were able to train their mind in compassion for all beings. Shakyamuni Buddha and all the buddhas of the three times, as well as all the great saints in the various religions, were originally like us. They had ignorance, anger, desire, jealousy, pride, ill will, and all the other mental faults, as well as all the other problems in life, but they didn’t just leave their life in problems. They became different from us by putting effort into developing their inner qualities, the qualities of their mind. They reduced their faults of mind and made an effort to developing its good qualities, the essence of which is compassion for all beings.

If we have compassion in our heart, everyone becomes our friend, even someone who is cruel to other beings, and even poisonous snakes, tigers, and other wild animals. No matter how wild or violent beings are, they cannot harm the compassionate person because of the power of his or her positive attitude and, because of the vibration of that person, the blessing of his or her positive mind, their attitude even changes for the better and they stop giving harm to others.

In Lhasa, Tibet, there were three great monasteries—Sera, Ganden, and Drepung—which were like universities except that they didn’t have the wide variety of subjects that Western universities have but concentrated on the study and practice of the Buddha’s teachings. While study of the philosophy of other religions, particularly Indian religions, was included, it was mainly the entirety of the Buddha’s teachings that was studied. Study and practice were combined for the development of the mind.

Sera Monastery has two colleges: Sera Je, the college to which I belong, and Sera Me. One of the abbots of Sera Je, very learned and well-known in Tibet, was able to escape from Tibet to India. This abbot had a cat. Usually when a cat sees a mouse it immediately runs to attack it. That’s the normal way a cat acts. Even though this cat had been killing mice before, its mind changed once it came to stay with the abbot and he started to take care of it. Even when a mouse ran around the room, the cat would never attempt to catch it. It would just stay relaxed.