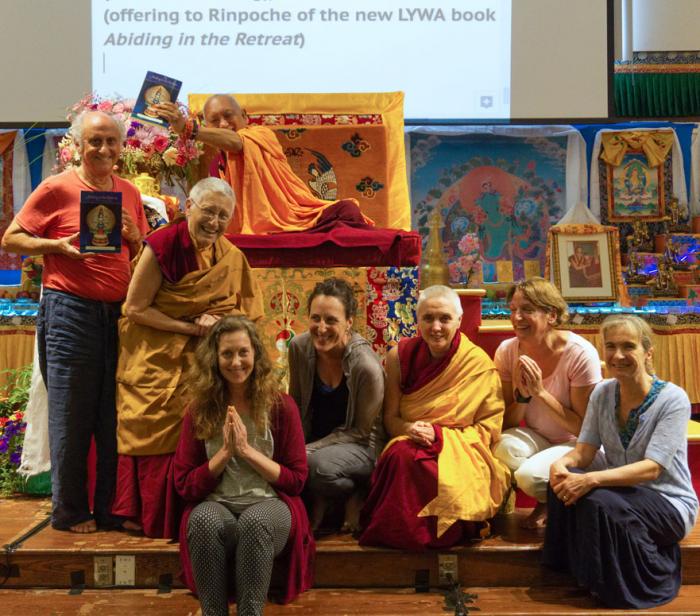 Thank you so much for your receiving our monthly eletter. Right now a few of us from LYWA have the good fortune to be attending the Light of the Path retreat in North Carolina. We hope that you have been seeing updates from the retreat and links to the FPMT's live stream of the teachings on Facebook. We were so happy to be able to offer our latest publication in person to Lama Zopa Rinpoche at the retreat--read on for details.

Abiding in the Retreat: A Nyung Nä Commentary is now available! Abiding in the Retreat is a commentary to a nyung nä sadhana composed by Kälzang Gyatso, the Seventh Dalai Lama. Nyung nä is an intensive two-day retreat that combines meditation on Thousand-Arm Chenrezig and recitation of Chenrezig’s mantra, OM MANI PADME HUM, with prostrations, fasting and silence. In this book, editor Ven. Ailsa Cameron has skillfully combined teachings on nyung nä practice given by Lama Zopa Rinpoche from 1984 through to 2009.

LYWA staff attending this year's Light of the Path retreat are pictured here with Lama Zopa Rinpoche: Nick Ribush, Ven. Carolyn Lawler, Laura Haughey, Stacey Martin, Ven. Sarah Thresher, Jen Barlow and Board Member Debra Thornburg. The new book was also offered to all the participants, and Rinpoche said some words about the book and about all those who support the work of the Archive and thereby have contributed to the production of this book:

Rejoice in your part in bringing these precious teachings to everyone everywhere!

You can order your copy online, find links to ebook vendors, or download the entire book as a PDF file on our website. We have included an excerpt from the book below as this month's eletter teaching, and Chapter One and Chapter Six are available to read online.

If you are an LYWA Member, you can download ebook versions from the Members Area. 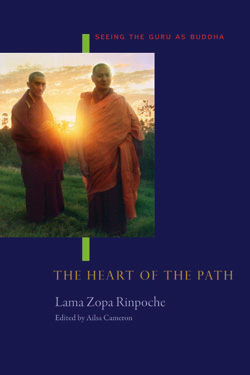 LYWA titles Back in Print

You may have noticed that some of our titles had gone out of print but we are happy to report they are back in print again! This is made possible through print-on-demand, a digital technology that allows individual copies to be printed to order.

Paperback copies are now available of Lama Zopa Rinpoche’s The Heart of the Path, Teachings From the Vajrasattva Retreat and Making Life Meaningful, Lama Yeshe's and Lama Zopa Rinpoche's Advice for Monks and Nuns, and Geshe Jampa Tegchok’s The Kindness of Others. 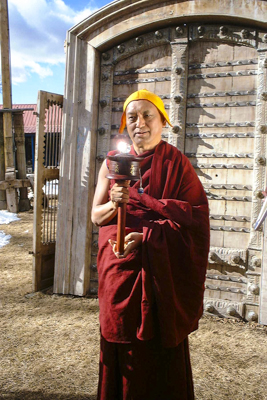 We have a new excerpt to share with you from Rinpoche’s Teaching on the Heart Sutra, a two-day seminar held in Melbourne, Australia, in March 2000. In this excerpt, A Good Heart a Day, Rinpoche explains how precious and kind others are, and discusses the wisdom realizing emptiness, the essence of the Buddha’s teachings.

Along with this teaching, you can watch a video excerpt of Rinpoche giving a commentary on the fourth stanza in the Eight Verses of Thought Transformation, and you can view other excerpts from these Heart Sutra teachings on our YouTube channel.

New advices added to the website this month include:

•    Low Self-Esteem:  This advice was given to a student who had low self-esteem, was experiencing many obstacles and requested life practices.
•    A Quick Way to Purify Obscurations: Rinpoche explained the importance of purification and advised nyung nä and lam-rim as the main practices for a new student.
•    The Merit of Taking Precepts on Chokhor Duchen:  Rinpoche typed this letter himself when he heard that thirty young people were taking precepts on Chokhor Duchen, one of the four great holy days when merit is multiplied.
•    Advice After the US Election: Rinpoche offered this advice following the 2016 presidential election in the United States.

As always, you can view the list of the latest additions to the Advice Book on our website.

NEW TRANSLATIONS in french and spanish

Lama Zopa Rinpoche's Bodhisattva Attitude has now been translated into French by FPMT's French Translation Services and is freely available for download as a PDF file. The topic of Bodhisattva Attitude is how to develop bodhicitta by practicing it throughout the day and night. This book is drawn from Lama Zopa Rinpoche’s essential teachings on bodhicitta given from 2008 onward and is edited by Ven. Sarah Thresher. A new English edition is forthcoming. 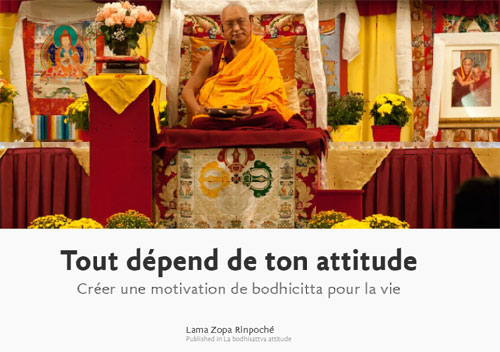 We are so happy to announce that for the first time LYWA multimedia presentations have been translated into another language! Two chapters from the multimedia presentations from Bodhisattva Attitude, "Everything Depends on Your Attitude" and "Cutting the Concept of Permanence", have now been translated into French by the French Translation Services.

For our Spanish readers, the following teachings by Lama Yeshe and Lama Zopa Rinpoche have now been translated into Spanish by Felipe Ángel, from Centro Yamantaka:

Integrating What You've Heard: Lama Yeshe gave this teaching at a Sunday afternoon lecture at Kopan Monastery, Nepal, in 1972. This is an edited version of the earliest recorded teaching by Lama Yeshe.

Loving Oneself: In this teaching at Jamyang Buddhist Centre, London, 1996 Lama Zopa Rinpoche advises that practicing bodhicitta is the best way to love oneself.

New on the LYWA Podcast: Compassion is the Real Answer

Listen to the latest offering on the LYWA Podcast, Compassion is the Real Answer. In this teaching given in Madrid, Spain on June 10, 2009, Lama Zopa Rinpoche begins by chanting the name mantra of Shakyamuni Buddha, offers commentary on the visualization of Chenrezig and leads group chanting of the compassion mantra, OM MANI PADME HUM. Rinpoche also explains with clarity, precision and great warmth the benefits of compassion and the law of karma. You can read along with the teaching transcription here.

We are so grateful to all of you who support our work and in doing so are partners in bringing these precious teachings to everyone everywhere. Please enjoy this excerpt from Rinpoche's Abiding in the Retreat. 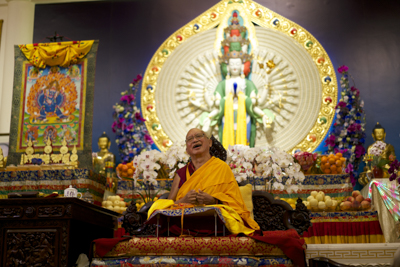 It’s mentioned that if you have done even one nyung nä well or if you recite ten malas of OM MANI PADME HUM every day, there is unbelievable benefit, especially if you want to heal people. When you are in a public place, the negative karma of anybody who sees you is purified, and those people won’t be reborn in the lower realms. If you are on top of a hill with many people down below, all their negative karma is purified when they look at you. That means you become meaningful to behold.

This happens because of the power of mantra and also because you visualize yourself as Chenrezig. This blesses you, so that your body becomes a relic. In that way, the negative karma of anybody who sees you is purified. Even if you don’t have any particular reason to go to a market, you can go there and walk around just to purify other sentient beings. Doing nyung näs and reciting ten malas of OM MANI PADME HUM every day are great practices.

Some years ago in Spain, when I mentioned that reciting ten malas of OM MANI PADME HUM every day has this benefit of purifying the negative karma of anybody who sees you, the daughter of the director of the Valencia center thought that Richard Gere should recite ten malas a day because he’s seen by so many people. So many people in the world would then get a lot of benefit. This thought came in her mind. She told me that she wrote to Richard Gere about this. I didn’t hear about it from Richard Gere, but I heard about it from her.

Some years ago I gave the oral transmission of a mantra that has the power to purify the negative karma of anybody who hears your voice. This applies to even the five uninterrupted negative karmas. Your speech becomes of unbelievable benefit to other sentient beings, protecting them from the heaviest suffering of the lower realms and causing them to receive a higher rebirth or to be born in a pure land. At that time, I didn’t mention that reciting OM MANI PADME HUM also has all these benefits.

If you do nyung näs or recite OM MANI PADME HUM one thousand times every day, when you then go to swim in a river or an ocean, since your body is already blessed by visualizing yourself as Chenrezig and by reciting the mantra, the whole river or ocean is blessed. All the people who then come to play in or on the water, swimming or surfing, are purified; the negative karma of anybody who is touched by the water is purified, and the same thing happens to all the numberless other beings in the river or ocean, from the large sharks and fish down to the tiny microscopic beings. All their negative karma to be born in the lower realms is purified.

If you recite one thousand manis every day and also visualize yourself as Chenrezig, it’s said that if your body is cremated when you die, the smoke from the cremation fire purifies the negative karma of any being it touches, whether human or animal, and they won’t be reborn in the lower realms. There’s also this unbelievable benefit.

If you do this practice then go for a walk, the negative karma of all the people who see you is purified, and it’s the same with even mosquitoes, flies and other insects that land on your body.

One time at Land of Calm Abiding (previously known as Shiné Land), an FPMT retreat place in California, there were two old horses, and I wanted to read the Arya Sanghata Sutra for them. A couple was taking care of the land, and the woman had to give the horses food again and again to keep them there while I read the Arya Sanghata Sutra and chanted mantras to liberate them. She had to give them a lot of food to keep them there.

When the flies came that day, although I hadn’t remembered before, I thought that because I had done those mantras in the morning, it might be meaningful for the flies to land on my arms. I don’t know—maybe if a lot of mosquitoes had come I might have freaked out. I’m joking.

A long time ago, before Kopan Monastery was built, we were staying with Zina [Rachevsky]. In the evenings some Western students would come and we would meditate on lam-rim in grass huts. So many mosquitoes came! At those times, we tried to practice a little bit of Buddhadharma, a little bit of charity. The mosquitoes would land and drink our blood, and then after they went away we would feel good, as if something had been purified.

Excerpted from Chapter 6: The Benefits of Reciting OM MANI PADME HUM from Abiding in the Retreat: A Nyung Nä Commentary. Edited by Ven. Ailsa Cameron. You can read the rest of this teaching on our website.