Last week, on February 19th, we celebrated Losar, the Tibetan New Year. Happy New Year to all our friends and supporters! May this be another year of countless meritorious activities we engage in together, spreading the precious teachings of Lama Yeshe and Lama Zopa Rinpoche far and wide for the benefit of all.

See below for a report on the new teachings and video we have made available this past month. Thank you so much for partnering with us in our mission.

LOSAR, MONLAM AND THE DAY OF MIRACLES

We are in the midst of a very auspicious time for merit accumulation, which began on February 19th with Losar, the Tibetan New Year. On Losar the community gathers together to rejoice and make extensive offerings for peace and prosperity in the new year. Losar is also an extremely special day for the FPMT family as it marks the passing of our supremely kind founder Lama Yeshe. 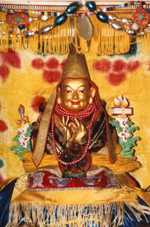 Losar is followed by the Monlam Chenmo or the Great Prayer Festival which extends beyond Losar for 15 days. The fifteenth day this year, the Day of Miracles, falls on March 5th. The great Lama Tsongkhapa instituted the Monlam Tradition in 1409 to gather together monks, nuns and laypeople from all over Tibet into the Jokhang at Lhasa for extensive prayers, pujas, teachings and other meritorious activities.

Lama Tsongkhapa chose the Monlam Chenmo to coincide with the anniversary of incredible events in Shakyamuni Buddha's life traditionally celebrated during the first two weeks of the lunar new year. As cited by Lama Zopa Rinpoche from the Vinaya text Treasure of Quotations and Logic, the karmic power of all actions done on the anniversary of these events is multiplied by one hundred million!

Shakyamuni Buddha had been challenged by six rival teachers for many years to prove his miraculous powers. The Buddha finally accepted the challenge and began on the lunar new year. The Buddha then displayed miracle after miracle for the next 15 days, finishing on the Day of Miracles. Due to the power of these miraculous displays the Buddha turned to the Dharma the minds of the six rival teachers and the huge crowds who were watching.

We invite you to join with us during this very auspicious time in practicing virtue and increasing our commitments to our teachers and the Dharma. See the FPMT website for a link to Rinpoche's advice on How to Make the 15 Days of Miracles Meaningful and practices specifically recommended by Rinpoche for Buddha Multiplying Days.

We also invite you to take this opportunity to make an offering to the Archive during this time, through the Day of Miracles on March 5th, and rejoice in all the extra merit accumulated! 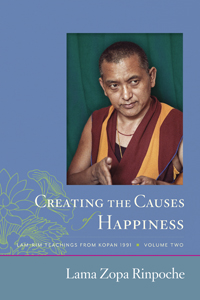 We are pleased to announce that Creating the Causes of Happiness, the second volume in a new four volume ebook series of Lama Zopa Rinpoche's teachings given during the 24th Kopan lam-rim course in 1991, is now available as an ebook everywhere! See links in our online store. The first volume, Practicing the Unmistaken Path, was published last October.

We hope you'll enjoy experiencing the feeling of being right there in person with Rinpoche for the one-month Kopan course as you read these lightly edited transcripts. This second volume covers topics such as the nature of the mind, karma, death, reincarnation and emptiness and is interwoven with an extensive and illuminating logical debate between Rinpoche and a student on whether past and future lives exist.

If you are an LYWA Member, Creating the Causes of Happiness is freely available to download as a pdf or in ebook format from our Members Area. And, if you want to read more Kopan course transcripts -- from 1972 up to 2010 -- you can find a list of all course transcripts on our website.

Below is an excerpt from Creating the Causes of Happiness, offered as this month's eletter teaching below.

This month has seen a big surge in new uploads to the LYWA Youtube channel!  Watch a series of Dharma teachings given by Rinpoche in the incredibly beautiful gompa at Amitabha Buddhist Centre in March 2013 titled The Path to Total Freedom. Or experience Rinpoche giving an intimate short heartfelt teaching on karma and future lives. Another new video recorded features three paper dancers helping Rinpoche to explain the three principal aspects of the path at lightning speed!

Watch for even more to come and be sure to subscribe to the LYWA channel to get immediate word when brand new video goes live!

This month we posted a speech on The Purpose of Building a Center by Lama Zopa Rinpoche, given at the opening of a new building for Amitabha Buddhist Centre, Singapore, May 2007. Edited by Claire Isitt.

We have also posted a long advice from Rinpoche to a student in the FPMT Masters Program on offering service to the guru through study, where Rinpoche says:

NEWS FROM THE FPMT 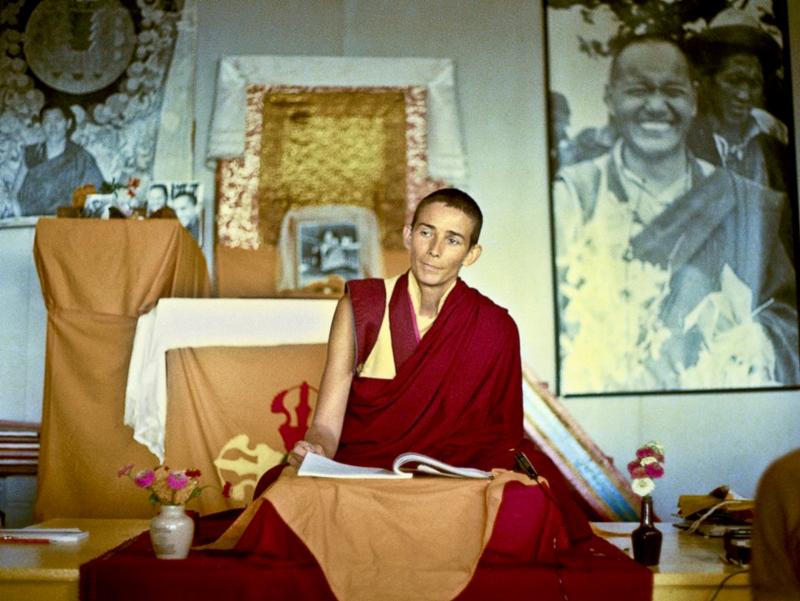 And we are sorry to report that we recently received news of the passing of Venerable Anila Ann McNeil, one of Lama Yeshe and Lama Zopa Rinpoche's earliest students, in Vancouver on Sunday February 22. She was ordained as a Buddhist nun in 1970 and has led an extraordinary life benefiting countless beings. Her devotion to the lamas combined with a fearless, pragmatic attitude and a warm, loving heart has inspired two generations of dharma practitioners and all who met her.

You can read a more detailed biography, with a links to an interview and pictures, on the FPMT website, and read stories of the early days of Anila Ann with the Lamas in our Big Love blog.

Lama Zopa Rinpoche has given the following advice to benefit Anila Ann at this most important time:

What is best to help and support Ann now, with her passing, is the recitation of the Golden Light Sutra. The students there [Vancouver] can do it for her, and others who know her in other areas can do for her ... not necessary to be in her presence. The Sutra should be recited a minimum of three times but of course, the more the better.

For this purpose it would be so beneficial if you could please make the reading of the sutra part of your daily practice, even if it just reading one page, including Anila in your dedications.

Chenrezig practice can also be done: The essence of the Chenrezig practice for her is to recite the Mani mantra [OM MANI PADME HUM] and visualize powerful white light coming from Chenrezig's heart to Ann, purifying her, all her negative karma, like very bright sunlight suddenly coming into a dark room. At the end visualize Ann being in the pure land of Chenrezig, strongly purified of all her negative karma's.

The Namgyalma mantra should be recited with the same visualization, with Namgyalma purifying her of all her negative karma. Don't need initiation to do this.

You can also do any of the following practices:

Please join us in supporting Anila Ann McNeil in this very important stage of her journey. We are all grateful for the time we got to spend with her, a gentle teacher right to the end.

LYWA NEWS FROM HOME AND ABROAD 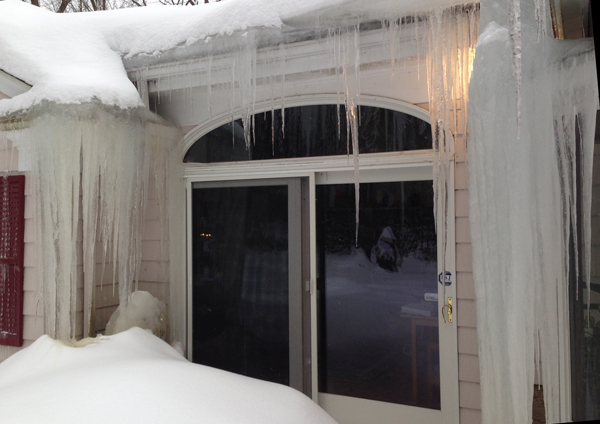 Well, as many of you may know, we had an insane amount of snow here in Boston this month, as evidenced by this picture of the doors leading from my office into the yard. I couldn't stand it any longer so took off for warmer climes and find myself writing this from Singapore! (Actually the trip was planned about a year ago, as I mentioned in last month's eletter.)

It's been wonderful catching up with many of our friends and supporters here and I look forward to going to Kuala Lumpur soon to catch up with friends there. Back in Boston mid-March.

Thank you again for your kindness and support. 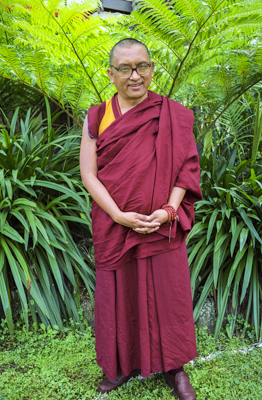 THIS MONTH'S TEACHING: The Importance of Compassion

Subduing the mind, practicing a good heart, is needed very much, even for somebody who wants to be a very materialistic person, who believes in nothing other than what you can see with your eyes, the material, substantial things that you see with your eyes, the external phenomena. Even for somebody who never wants to accept any faith or any religion, that person still needs happiness.

If he doesn’t subdue his mind, doesn’t practice a good heart, then many people can give him problems. He does many things wrong toward others because of the motivation, because of not subduing the mind, his life is motivated by the self-cherishing thought. He doesn’t care about others’ happiness, only about his own happiness, doing whatever he wants unless he has no choice—because of the police or because there are guns or bombs giving him no choice, so he can’t do it. That’s different because there’s some outside force. But he won’t voluntarily not harm others, without the need of those kinds of forces that stop people from doing negative, harmful actions toward others. He won’t voluntarily from his own side benefit others, not harm others, without the need of those kinds of forces stopping those harmful actions toward others for the happiness for the self, for power and so forth.

When we don’t create the reason, when we don’t harm others, there’s happiness, peace, in this life and in future lives. As I mentioned yesterday, in this way there’s success up to enlightenment. There’s success in everyday life in practicing, in subduing our own mind, watching our own mind, looking after our own mind, which means looking after ourselves. Whenever there’s danger of harmful thoughts arising, then we can apply the meditations we have learned, especially the meditations of the graduated path to enlightenment, which have incredible, practical power to immediately solve the problems. Immediately, there’s no space in the mind for those harmful thoughts or the disturbing thoughts to arise. Suddenly, even though they might start to arise, they are stopped.

This means living our day-to-day life with compassion, with the thought of universal responsibility, feeling we are responsible for obtaining the happiness for all sentient beings and we are responsible for freeing everyone from all the problems and causes. This includes not only our friends, but also strangers and especially enemies.