Thank you for your interest in and support of the Archive. Please share this eletter far and wide! We’d love more people to benefit from the amazing teachings we offer.

Report from Light of the Path Retreat
For the first half of this month I was at the Light of the Path retreat with Lama Zopa Rinpoche, a wonderful experience. If you were not one of the 250 people who made it, please try to get to the next one. 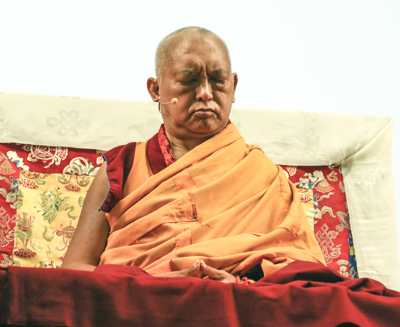 The day started at 5:00 a.m. with morning prayers, the Eight Mahayana Precepts, prostrations to the Thirty-five Buddhas and Lama Chöpa/Jorchö puja until 8:00, then there were three more sessions each day, morning, afternoon and evening.

Rinpoche taught twice a day, teaching us how the mind creates all suffering and happiness, the importance of guru devotion, the benefits of Dharma practice, how to do the food offering practice, the significance of the perfect human rebirth, why we should at least be vegetarian, and many other topics. Rinpoche also gave a Vajrasattva je-nang and a series of transmissions of mantras and other practices. Many photos from the retreat can be seen here. Like I said, a wonderful experience.

One of the important practices Rinpoche transmitted was The Dharani Called Possessing the Attributes of All the Buddhas.

As Rinpoche has said in an advice to a student who wrote asking about practices for protection from illness:

I am offering a suggestion of a short practice that you can easily try to read every day. This very precious method from Buddha is in Buddha's teaching in the Kangyur: the "Dharani Called Possessing the Limbs [Attributes] of All the Buddhas." It is extremely worthwhile to try to do this. Recite it three times if possible. If not, recite it just once.

Buddha has explained the benefits of this practice in the text as follows: you will not catch a serious disease, you will not be harmed by the dangers of the four elements of earth, water, fire, and wind, poisons and life-threatening diseases. It will help you to not be reborn in the lower realms—of hell, the hungry ghosts and animals—and it will benefit the lives of all sentient beings.

New Lama Zopa Rinpoche Teachings Posted
We have just posted Lama Zopa Rinpoche's teachings from the 41st Kopan Meditation Course in December 2008. Rinpoche covers a range of topics including extensive teachings on the benefits of cherishing others, the nature of phenomena, and stories about the beginnings of the FPMT. This month's e-letter teaching below is excerpted from this course. 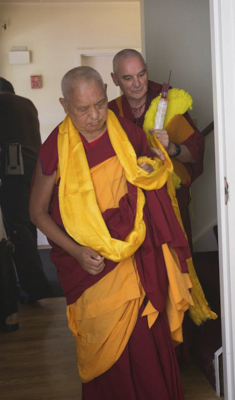 One lecture during that course was given by Ven. Roger Kunsang, FPMT's President and CEO, where he relates his early experiences attending the Kopan course, and travelling with Rinpoche. During his first years on the road with Rinpoche they would travel all year long, and Ven Roger reflected that "it was quite incredible. I mean, for many days Rinpoche wouldn’t sleep, he would just go non-stop, non-stop." Ven. Roger recounts:

One time after ten, twelve, fifteen years on the road, I thought it was interesting because I had still not heard Rinpoche say, “Well let’s take a break, let’s have the day off.” I’ve not even heard Rinpoche ask for a cup of tea. I always bring the tea, but he wouldn’t even ask for a cup of tea, he wouldn’t even just say, “Okay, let’s take an hour and drink the tea quietly, alone.” It sounds strange, doesn’t it? [Rinpoche laughs]

I don’t think Rinpoche ever had the slightest thought for himself, ever. That’s the way it appeared to me. And even though there have been a lot of obstacles, a lot of difficulties, et cetera, I’ve never seen a minute of anger, never seen him getting frustrated, never getting impatient, never saying anything unkind. It’s amazing. I mean, you get into some really intense situations, and if you don’t sleep for days you get very irritable. I do, and I was always having to deal with falling asleep at the dinner table. I’d fall asleep standing up.

If you enjoy reading these early stories, you will love Lama Yeshe's biography Big Love when it is published, and in the meantime you can read more stories from the early days of FPMT on our Big Love blog.

New Advice from Lama Zopa Rinpoche
We recently posted an compilation of various advices on transforming depression that Rinpoche has given in the past. In this advice Rinpoche explains that through prayer and practice we can transform our minds so that:

... depression becomes unbelievably useful, especially for having realization of bodhicitta. It is extremely beneficial for ceasing all the defilements and completing the realizations, to achieve full enlightenment and to liberate numberless sentient beings, who are the source of our past, present and future happiness—to liberate them from the suffering of the lower realms and the whole entire samsaric sufferings, and bring them to enlightenment. So, depression becomes extremely precious.

See Rinpoche's Online Advice Book for more advices on how to transform various negative emotions, as well as over hundreds more advices on other topics such as practice advice, health, meditation and retreat advice, and more.

Saka Dawa June 13th
Saka Dawa, the day we commemorate the Buddha's birth, enlightenment and parinirvana, falls this year on June 13th. This is an auspicious day for engaging in meritorious activities, such as making offerings, reciting sutras and doing practice. According to Lama Zopa Rinpoche, virtuous actions done on this day are multiplied one hundred million times. We invite you to donate to the Archive on this day to join in our work to benefit all beings, and collect heaps of merit at the same time!

FPMT has also launched their Work a Day for Rinpoche campaign, striving to gather 700 workers by Saka Dawa, to offer support to Lama Zopa Rinpoche's vision and work during the most auspicious time of the year. Join online on the FPMT website.

Thank you for your kind and generous support.

This Month's Teaching: Don't Get Angry at the Stick 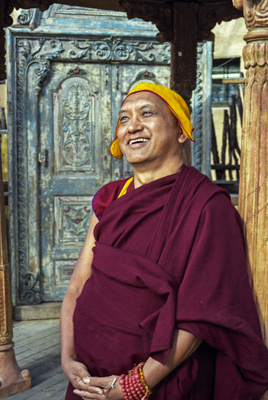 During President Bush’s time, when the United States was fighting, making a war with Iraq, there was a missile that came from very far away, from many thousands of miles away, and aimed exactly for its target. The missile came and blew up exactly what the soldiers wanted. That’s outside, but here we are shooting the real enemy, delusion. With wisdom, we eliminate delusion and we achieve liberation as well as enlightenment.

We can think about general causative phenomena but particularly in our life, with our body and mind, we can look at the people surrounding us, our families, friends, enemies, strangers, and our material possessions. Whatever objects we get angry with or have strong desire for, with strong attachment, ignorance or indifference—it’s very good to use those particular objects. Then it’s like a bomb hitting just the right target, our inner enemy.

Actually, there’s no outside enemy. There’s a reason why people give harm to us, get angry with us or criticize us. There’s a reason, there’s a cause for that, and that cause is our mind. For anybody, in any situation, even if a mosquito is biting us, the cause is our mind—attachment, anger, and of course no question about the root, ignorance. There’s no question, that’s the root. Ignorance—the concept holding things, the I and the aggregates as truly existent, which means the self-cherishing thought—that’s the real root.

In the past we harmed others with these negative thoughts. We made mistakes, we did unrighteous actions and harmed others. What is happening now is the result of that. This mosquito biting us, that person who doesn’t like us even from the first time he saw us, that person who scolds us, even that unknown person who gets angry at us though we’ve never met before—all these things are just results, just creations of this mind. They are caused by this mind, by these negative thoughts, especially the self-cherishing thought.

It is very helpful to remember this when somebody is angry with us, scolding us or talking about our mistakes. If we can remember this at that time; that the situation is a tool, used by these negative thoughts. This is happening now because in the past we harmed that person, we did some wrong action to that person. The harm they are doing now is just a tool. The main enemy is our own negative mind.

It’s very good to remember this. We can meditate on this while the other person is shouting at us and getting really angry, while even the nose is very angry. (I’m joking.) The person totally changes, even their face; they become angrier at us and insult us. At that time, we can meditate, sitting cross-legged, like this. Then, we can open our eyes and look at the person, like this, you know. [Rinpoche demonstrates] At that time if we do that, it’s very good.

At other times, no how much we try, we can’t do this. We forget completely. For so many years we do this [Rinpoche strikes a pose], but at that time we can’t do it, we forget.

Anyway, the main thing to remember is that our mind caused that person to do this. It comes back to us; it’s caused by this self-cherishing thought, this negative thought. Remembering that is so good, so good; it’s unbelievable.

So, there’s no need to get angry, there’s no need to get upset with the other person. The only solution is to take care of our own mind, to take care of our own life. As I mentioned, the United States sends missiles exactly to its target—the soldiers aim and the missile goes exactly. That’s like applying the lam-rim meditation, emptiness, renunciation, karma. Within the renunciation meditation, there’s karma and impermanence, how life is in the nature of impermanence. Even going through this, looking at how causative phenomena are like a star, even that makes it so powerful.

There’s no reason at all to get angry with the outside condition, though we feel obliged to. Really, the cause is this ignorance or this self-cherishing thought. What I am talking about here is the solution to that—the bomb to explode all that, to eliminate our negative thoughts.

Excerpted from Lama Zopa Rinpoche's teachings at the 41st Kopan Course in 2008. Read the remainder of this excerpt here.