I hope you are well. This time, more news than usual!

1. The Archive has to move. Thanks to our kind benefactors, Drs. Leo Liu and Penny Noyce, we’ve been in our excellent house in Weston, Massachusetts, for the past five years, but now we have to leave. However, thanks to another kind benefactor, who prefers to remain anonymous, we have been offered another excellent, although smaller, house from which to work. Therefore, at the beginning of January, we’re moving to our new location in Lincoln, Massachusetts, the next town over, about three miles from where we are now. Our post office box mailing address will remain the same. Partly because of this, we’re doing only one e-letter to cover November and December.

2. We have just reprinted some of our ever-popular Lama Yeshe teachings. Becoming Your Own Therapist and Make Your Mind an Ocean are now available in a single volume; The Essence of Tibetan Buddhism: The Three Principal Aspects of the Path and An Introduction to Tantra is available as before. As usual, we have published both titles for free distribution. Please order as many of these as you can so that we don’t have to schlep so many books when we move! Visit our on-line store to browse these and other titles.

3. Finally, and most exciting of all, we have just launched the Lama Yeshe Wisdom Archive membership program, which gives you the opportunity to get involved in amazing new initiative: the first-ever concerted effort to make available the collected works of Lama Yeshe and Lama Zopa Rinpoche: the lineage of teachings of the Foundation for the Preservation of the Mahayana Tradition.

The short version of this initiative is that the Archive contains more than 10,000 hours (more than 60,000 pages of unedited transcript) of incredible Dharma teachings, most of which have never seen the light of day since they were given. We now want to edit them for the benefit of all, and to do that we need to hire at least five editors for at least five years. To do that, we need a huge infusion of funds. Therefore, we are launching a membership program, hoping to attract at least 600 members, each of whom will contribute $1,000. That’s a lot of money from a lot of people, but that’s our goal. For more details of this program--especially the benefits that will accrue to those who become members--please see the membership pages our Web site.

Thank you so much for your kind interest in the Lama Yeshe Wisdom Archive and what we do for the benefit of all sentient beings. 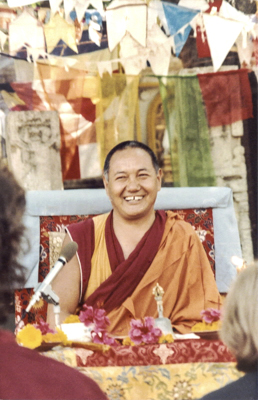 When we teach karma, we often refer to its four characteristics, the first of which is that karma is definite.

Take, for example, the attitude of certain followers of the Hindu religion. You’ll find many people like this in India and Nepal: they believe in karma, but they believe it’s completely fixed. “I was born a carpenter. God gave me this life. I’ll always be a carpenter.” “My karma made me a cobbler; I’ll always be a cobbler.” They are very sincere in their belief, but very wrong in thinking that karma can’t be changed. When Westerners come across such people they can’t believe that they can think this way. Westerners know immediately from their own experience that if you really want to change your status in life you can do so.

But because these people’s misconceptions are so strong, they can’t change. It’s silly, isn’t it? That kind of super-belief is religious fanaticism. It’s ignorant; it closes your mind and prevents you from expanding and developing it.

I also sometimes see great misconceptions about karma in new Dharma students. They read and think about karma, accept its existence, but then become too sensitive about it. If they make a mistake in their actions, they get emotionally terrified and guilty. That’s wrong, too.

If you put your energy into a certain environment and a certain channel, a different form of energy will manifest. It changes. If you direct your conscious energy one way, one kind of result will come; if you direct it another way, a different kind of result arises. It’s very simple. But what you have to know is from what source your actions come. Once you do, you’ll see that you are responsible for what you do; you can determine what you do and what happens to you. It’s more up to you than to your circumstances, friends, society or anything else outside you.

If, however, you don’t know that it’s possible to direct the energy of your body, speech and mind or how to do it, if you have no idea of how cause and effect operates in everyday life, then of course, you have no chance of putting your energy into positive channels instead of negative ones. It’s impossible because you don’t know. 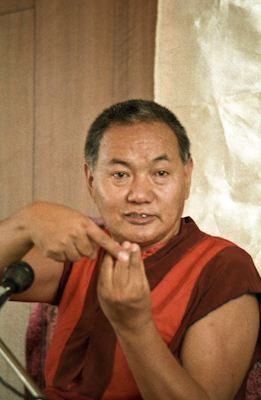 In general, it’s our motivation that determines whether our actions are positive or negative; our mental attitude. Some actions start out negative but can become positive due to the arising of an opposing kind of energy. The Abhidharma philosophical teachings talk about absolute positives, such as the true cessation of suffering, but for us, it’s more important to understand positive and negative on the relative level. That’s what we’re dealing with in our everyday lives: relative positives and relative negatives.

However, we’re usually unconscious whenever we act. For example, when we hurt our loved ones, it’s mostly not deliberate but because we’re unconscious in our actions. If we were aware that every action of our body, speech and mind constantly reacts internally within us and externally with others, we’d be more sensitive and gentle in what we did, said and thought.

Sometimes our actions are not at all gentle but like those of a wild animal. Next time you’re acting like a wild animal, check up which channel your energy’s in at that time and understand that you can change it—you have the power, the wisdom and the potential to do so. You can redirect your energy from the negative into the positive channel.

Also, you have to accept that you’re going to make mistakes. Mistakes are possible. You’re not Buddha. When you do make an error, instead of freaking out, acknowledge it. Be happy: “Oh, I made a mistake. It’s good that I noticed.” Once you’ve recognized a mistake, you can investigate it intensively: what’s its background? What caused it? Mistakes don’t just pop up without reason. Check in which channel your mind was running when that mistake happened. When you discover this, you can change your attitude.

In particular, you have to understand that negative actions come from you, so it’s up to you to do something to prevent their negative reactions from manifesting. It’s your responsibility to act and not sit back, waiting for the inevitable suffering result to arise.

Therefore, instead of simply accepting what happens to you, believing “This is my karma” and never trying to work with and change your energy for the better, understand that you can control what happens to you and be as aware of your actions as you possibly can.

Lama Yeshe gave this teaching at Chenrezig Institute, Australia, 28 June 1976. The first part will appear in Mandala, journal of the FPMT, February 2004. We strongly recommend that readers of the LYWA e-letter subscribe to Mandala. Edited from the Lama Yeshe Wisdom Archive by Nicholas Ribush.