This prayer was composed by Dorje Chang Losang Jinpa Pal Zangpo, the glorified holy being. Translated by Lama Zopa Rinpoche at Kopan Monastery, Nepal, January 12-16, 2013 and scribed by Merry Colony. The short introduction is summarized from a commentary given by Lama Zopa Rinpoche in October 2010, at Shedrup Ling, Mongolia. The Tibetan text is available for download as a pdf file.

See also The Method to Transform a Suffering Life into Happiness (Including Enlightenment), a compilation by Lama Zopa Rinpoche of essential daily prayers and practices. 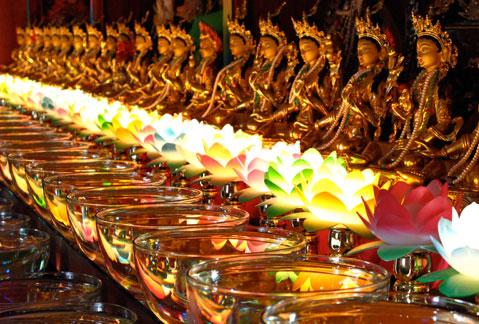 This short lamrim prayer contains the essence of the whole path to enlightenment and reciting it mindfully leaves a positive imprint in the mind to actualize all the realizations. It also directs your life to achieve enlightenment for sentient beings as quickly as possible by practicing the path of the three capable beings and especially Highest Yoga Tantra.

Essence encompassing all the buddhas,
Originator of all the holy Dharma of scripture and realization,
Principal of all the aryas intending virtue:1
In the glorious holy gurus, I take refuge.

Please, gurus, bless my mind to become Dharma,
Dharma to become the path,
And the path to be without obstacles.2

Until I achieve buddhahood, please bless me
To be like Youthful Norsang and Bodhisattva Always Crying
In correctly following the virtuous friend with pure thought and action,
Seeing whatever is done as pure,
And accomplishing whatever is said and advised.

This is how to correctly follow the virtuous friend, [the root of the path to full enlightenment].

Please bless me to see that this greatly meaningful body with freedoms and richnesses
Is difficult to find and easily perishes,
That action and result are so profound,
And that the sufferings of the evil-gone transmigratory beings are so difficult to bear.
Therefore, please bless me to take refuge from the depths of my heart in the Three Rare Sublime Ones,3
To abandon negative karma, and to accomplish virtue according to Dharma.

This is the graduated path of the lower capable being.

In dependence upon that, even if I achieve the mere higher rebirth of a deva or human,
I will still have to experience suffering endlessly in samsara
Because of not having abandoned, and being under the control of, the disturbing thought obscurations.
Therefore, please bless me to reflect well upon the way of circling in samsara
And to continuously follow, day and night,
The path of the three types of precious trainings—
The principal method for becoming free from samsara.

This is the graduated path of the middle capable being.

In dependence upon that, even if I achieve mere liberation,
Since there is no sentient being of the six types who has not been my father and mother,
Please bless me to think, “I must fulfill their purpose,”
And turn away from the lower happiness of nirvana.
Then, please bless me to generate precious bodhicitta
By equalizing and exchanging myself with others,
And to follow the conduct of the conquerors’ sons,
the six paramitas and so forth.

This is the common graduated path of the great capable being.

Having trained my mind in the common path in that way,
I will not be upset even if I have to experience the sufferings of samsara for a long time.
However, please bless me to look at sentient beings with extraordinary unbearable compassion,
And to enter the quick path of the Vajrayana teachings.
Then, please bless me to protect my vows and samayas more than my life,
And to quickly accomplish the unified Vajradhara state
In one brief lifetime of this degenerate time.

This is the graduated path of the secret mantra vajra vehicle of the greatest capable being.

2 Lama Zopa Rinpoche explains, “These three lines contain the 84,000 teachings taught by the Buddha, which include the Hinayana teachings and the Mahayana teachings of Paramitayana and Vajrayana. All those teachings are combined into the lamrim, the graduated path to enlightenment, which is divided into the graduated paths of the lower, middle, and higher capable beings. These three contain the whole lamrim and that is contained in the three principal aspects of the path to enlightenment.” [Return to text]

3 Konchog sum (Tib. dkon mchog sum) is often translated from the Sanskrit tri ratna as “Three Jewels,” i.e., Buddha, Dharma, and Sangha, the three objects of refuge of a Buddhist. However, Lama Zopa Rinpoche prefers to translate the Tibetan term literally as “Three Rare Sublime Ones” to better convey the rarity and importance of encountering them. [Return to text]