What is presented here is both the sadhana and a commentary. The sadhana was translated by Lama Zopa Rinpoche and first published by the International Mahayana Institute, Nepal, in 1975. The commentary was first given at Tushita Retreat Centre, India, in July 1986. A revised edition was published in 1996 at Kopan Monastery in Kathmandu, Nepal. Transcribed and edited by Ailsa Cameron. 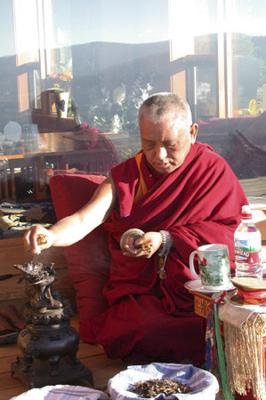 Refuge
I go for refuge, until I am enlightened,
To the Buddha, the Dharma and the Supreme Assembly.
Due to all the merits created
By my practice of giving and the other perfections,
May I attain the state of a Buddha
In order to benefit all transmigratory beings. (3 times)

Special Bodhicitta Prayer
Especially for the sake of all sentient beings
I must quickly, quickly in this very life
Attain the state of a fully enlightened buddha
For this reason I will now practice the Dorje Khadro burning offering. (3x) 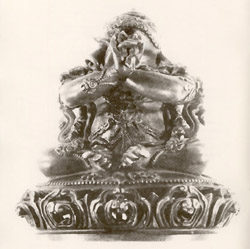 Visualization
The fire becomes void, that is, the wrong ordinary view of the fire as being self-existent becomes empty. The blissful wisdom realizing emptiness manifests in the form of a triangular, blazing fire. In the middle of the fire is an eight petalled lotus and sundisc with the seed-syllable HUNG at its center. The HUNG melts into light and becomes a five-pronged wrathful vajra, marked by a HUNG at its center. These then transform into the wrathful holy body of Dorje Khadro.

He is black in colour, has one face and two hands, holding a vajra and a bell. He exhibits the mudra of divine wisdom and wearing a crown of five skulls, he snarls into space showing four great fangs. He is also adorned with a necklace of fifty bleeding heads and a scanty tiger-skin loin cloth. He is seated with his legs forming a circle, and his whole aspect is that of a powerful, magnificent destroyer of all negativities and obstructions.

He has a white OM at his crown chakra, a red AH at his throat chakra and a blue HUNG at his heart chakra. From the latter, rays of light are emitted, inviting Dorje Khadro's transcendental wisdom and the initiating deities from their abode in absolute nature.

All is void. Out of the void, from KAM, eight skull-caps appear. In them, from HUNGs, the offering-objects arise, whose nature is voidness, whose aspect is the various offering-objects, and whose function is, as objects enjoyed by the six senses, to give special uncontaminated bliss.

Praise
To you Vajra Akshobhya, great wisdom,
The vajra sphere so very wise,
Y our three vajras of body, speech and mind, being the three mandalas,
To you who have this knowledge, Dorje Khadro, I prostrate.

Visualization
Seeing yourself in ordinary human form, a black PAM, seed-syllable of all your negativities, appears at your heart. At your navel, a red RAM, the red fire mandala appears, and beneath your feet a blue YAM, which transforms into a blue air mandala.

Light rays emanate from the PAM, bringing forth all the negativities and obscurations of your three doors, which appear as black rays and are absorbed into the PAM. From below, a blue wind blows and blue air rises up your legs, fanning the fire that blazes at your navel. Flaming rays pursue the PAM, chasing it out through the door of your nose. The PAM takes the form of a scorpion and is absorbed into the sesame seeds. These seeds are then offered to the mouth of Dorje Khadro.

As this mantra is said, the following prayer should be made:
All the negativities and obscurations that I have created, and all pledges that I have broken since beginningless samsaric lifetimes SHINTIM KURU SOHA (are all completely purified).

Each time that you say the mantra and make the prayer, also visualize clearly and strongly that you are continuously making offerings.

Praise
In the centre of the blazing wisdom fire stands the dark blue wrathful cannibal, Dorje Khadro. Just by remembering him, all demons and delusions are destroyed completely. To you, Dorje Khadro, I prostrate.

Asking forgiveness
Please forgive all my wrong actions, done while powerless through not understanding, and through not having found the materials to offer.

The transcendental wisdom returns to the absolute nature from where it came, and the samaya-being Dorje Khadro is transformed into a blazing fire.

Dedication
Because of these merits, may I be taken care of and not be separated from
The mahayana guru who shows the infallible path,
And drink the nectar of his speech, not being satisfied with a few words only.

Through the power received by completing the practice of renunciation,
Bodhicitta, right view, shunyata, the six perfections and the two tantra stages,
May I quickly attain buddhahood, possessing ten powers.

By the blessings of the Three Precious Jewels and the nondeceiving master,
And through the might of the nondeceptive, immutable sphere of reality,
May all be auspicious for myself and all others to accomplish all excellent prayers
And quickly achieve the omniscient state of buddhahood.

Commentary: Introduction »
+ View all Teachings on this topic
+ View All Teachings