The Benefits of Studying the Perfection of Wisdom Sutras (Prajnaparamita)

This is a talk given by Lama Zopa Rinpoche at Istituto Lama Tzong Khapa in Pomaia, Italy on October 22, 2000. Edited by Patrick Lambelet. It is part of the Basic Program course materials published by the FPMT. Istituto Lama Tsongkhapa is the site of the FPMT Master's Program which is also mentioned in the talk. 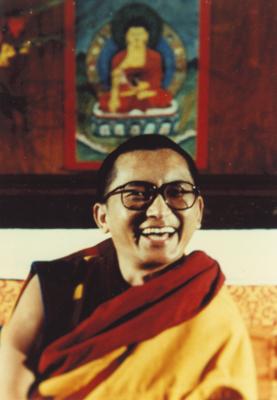 Guru Shakyamuni Buddha gave teachings to 500 swans in a field and, due to that, all those 500 swans were born as human beings in their next lives. Not only that, but they all became fully-ordained monks and then achieved the arya path in order to achieve total liberation from samsara. They progressed in the five paths, achieving the path of accumulation, path of preparation, path of seeing, path of meditation, and the path of no-more-learning. They all achieved those arya paths and so were able to overcome the sufferings of samsara in their next life.

This is how powerful it is to listen to the Buddha’s teachings and what great impact or benefit one receives. Just as those birds received unbelievable results in their next lives, so too it is the same for us in our daily life through listening to teachings, even if we do not understand them. The great benefit or impact that we get in our mental continuum just by listening to the teachings of Buddha is like the limitless sky; we get limitless skies of benefit. It is totally different from reading newspapers or watching TV – twenty-four hours or one hundred hours of watching TV – or reading novels about wars or somebody’s made-up stories. In the West, there are so many made-up stories; people read novels just to pass the time when they cannot fall asleep or have nothing to do. Then our life goes into novels. But there is a huge difference between reading or listening to Buddha-Dharma, Buddha’s scriptures – even if you do not understand them – and reading those other subjects. There are skies of difference, like the difference between the sky and the earth.

The impact or effect on your mental continuum from other subjects that are opposite to Buddha’s teaching is that they give rise to attachment, anger, and jealousy – when you see that somebody has great success in business or has great wealth, is a billionaire, millionaire or zillionaire, you become jealous. All the various negative, disturbing emotional thoughts arise and leave negative imprints on the mental continuum, which makes it more difficult to have the realizations of the path to enlightenment. By obscuring the mind, these negative emotional thoughts and their negative imprints become obstacles to seeing the ultimate nature, emptiness. Then, that makes it difficult to cease the cause of suffering – the unknowing mind, ignorance – as well the other obscuring, disturbing emotional thoughts and karma. This makes it difficult to become free from samsara, all the oceans of samsaric sufferings. So, you see, by listening to, studying, and reading Buddha-Dharma, even if you do not understand it now, it becomes very easy to understand that subject in your future lives. It becomes so easy to understand and actualize the meaning of the subject, the meaning of the words, and the path to practice. It makes your future life so easy, like the example of those birds who just heard the Buddha’s words. That story is nothing new, but it indicates the special benefit of listening to the Dharma, whereby it encourages one to listen to, read, and study Buddha’s teaching.

Vasubandhu, who wrote the text Abhidharmakosha, recited it every day. A pigeon, sitting on the roof above, was able to hear Vasubandhu reciting this. After the pigeon died, Vasubandhu checked with his psychic powers to see where this pigeon had been reborn and saw that it had been born as a human being to a family in the same area. He went down into the valley and, finding this child, asking the family whether he could have the child. The family offered the child to him and he took him back to his place. This child later became a monk named Acharya Sthiramati who wrote four commentaries on the Abhidharmakosha text that he had heard when he was a pigeon. Because that text was so easy for him to understand, he became learned in that subject and wrote four commentaries in that life. On the other hand, when he heard Madhyamika teachings, he found them hard to understand because he had not heard those teachings much in his past life. This shows how hearing the teachings of Buddha now makes a huge difference, even if we have not heard them in past lives. Even just hearing the teachings of Buddha – leave aside understanding them – makes a huge difference in our next lives. So that is a short story. From such stories, you can understand that by listening to Dharma, just by listening to the teachings of the Buddha, you can achieve a good rebirth in the next life.

In particular, it is important to study the subjects of the seven-year Masters Program and the Basic Program– the Prajnaparamita [Perfection of Wisdom] teachings, Abhisamayalamkaraand Madhyamikavatara, as well as Abhidharmakosha. The more extensively you learn the teachings of Buddha, the broader your understanding of what are correct thoughts and what are mistaken thoughts. You will develop more wisdom enabling you to discriminate what is right from what is wrong. Therefore, when you practice, not only will you practice correctly without many hardships and much time, but you will also be able to achieve correct realizations quickly. The more extensive your understanding of Dharma, the more you will be of benefit to others. You will be able to reveal the path to enlightenment and liberation according to the levels of intelligence of other sentient beings. For those who are of lower intelligence, you can give teachings that are more simple; for others, a middle version of explanation; then, for those who have greater intelligence, you can explain the Dharma in depth. In this way, you will teach that which suits their wishes and their level of intelligence. In this way, you will have more freedom to benefit other sentient beings. On the other hand, if one has very little understanding of Dharma, then there is not much freedom to benefit others by explaining Dharma to them.

Kunkyen Jamyang Shayba, one very high Amdo lama, wrote many extensive philosophical teachings. In fact, the very first definitions that one learns when beginning to debate the philosophical subjects in the monastery are his definitions of form, color, and so on. Each time one learns these definitions, those Dharma words, it helps develop omniscient mind; it is a procedure to achieve omniscient mind. It is a way to develop omniscient mind; to make the mind fully awakened or enlightened. Like that, every day, as we learn more meanings of words, we are creating omniscient mind. Thus, it is extremely worthwhile to learn Buddhism, especially to learn it in depth and extensively. Now, here, learning the Prajnaparamita is unbelievable. There is no way one can measure the benefit.

When you study the teachings on the perfection of wisdom, if you relate the studies to your own mind, your own view, your own life, your own concepts, and then analyze them, your studying becomes meditation. Therefore, you can see how much merit you collect studying the perfection of wisdom, such as the teachings on the Madhyamikavatara. It is just unbelievable merit, good luck, or good fortune. One collects good karma; it is just mind-blowing.

Originally, Lama Yeshe – who is kinder than all the three times’ buddhas – set up this seven-year program. Geshe-la [Geshe Jampa Gyatso], who was a classmate and a friend of Lama’s, planned and determined to establish this program. Because of that, you have this opportunity to study and learn these teachings on the perfection of wisdom – Madhyamakavatara and, before that, Abhisamayalamkara. You do not know how fortunate you are, so now you need to recognize the benefits of learning, memorizing, even just hearing these teachings. The benefit is unbelievable, whether one immediately understands the meaning or not. The main point is to realize that this teaching is so precious and what incredible benefit you get from that. The beginning of the Madhyamakavatara text says that [the perfection of wisdom] is called “mother” because all the numberless past, present, and future buddhas have been born from this perfection of wisdom. Also, the numberless bodhisattvas and numberless arhats are born from this wisdom. This wisdom is what liberates numberless sentient beings from all the oceans of samsaric suffering. It is the real Dharma, the real refuge that liberates us from the oceans of samsaric suffering, whose continuation has no beginning. This Prajnaparamita teaching is so precious, unbelievably precious. The Buddha said “Wherever this Prajnaparamita teaching is, I am there.” The Buddha said to Kunga (Ananda) that even if other teachings are destroyed that is okay, but one should not degenerate or allow even a little bit of the teaching of the Prajnaparamita to be destroyed. The Buddha asked Kunga to look after and protect the teachings of the Prajnaparamita. So, your studying the teachings of the Prajnaparamita is also a service to the teachings of the Buddha – to preserve and spread them. It is a very important service to the Buddha – this is what Buddha cherished so much, the teachings on the Prajnaparamita.

Therefore, it is a great success of Lama Tsongkhapa Institute that these programs – not only the seven-year program, but also the four-year Basic Program – are being established, fulfilling Lama’s holy wishes. As far as Dharma education is concerned, establishing and organizing this program is a great success on the education side. It also fulfills Lama’s holy wishes as far as organizing education for Western students in the West. That is an extremely important thing for personal development as well as to benefit the most important project in the FPMT – to have many qualified teachers to liberate numberless sentient beings. Each student, each person, who completes their studies will be able to liberate numberless other sentient beings – not only from the lower realms but from samsara, which is only in the nature of suffering – and then bring them to full enlightenment. So once this becomes successful, it can inspire people to start more programs like this in other parts of the world, in different countries, at other centers. The students who complete the studies here could help with, assist, or teach the Basic Program and other seven-year programs. After having studied well, they could be actual teachers. In so many parts of the world, they will be able to teach many people, enlighten and awaken many sentient beings from the darkness of ignorance; sentient beings whose minds have been dark, without the light of Dharma wisdom, from beginningless rebirth.

His Holiness the Dalai Lama and Dorje Shugden