The Benefits of Prayer Wheels 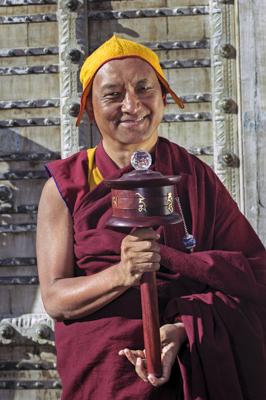 I often used to think, "How does turning of the prayer wheel become Dharma practice?" I had this question in my mind, simply because I was ignorant as to the benefits of the practice. I didn't know what an important practice it is and how beneficial it is in terms of purification. Just touching and turning a prayer wheel brings incredible purification and accumulates unbelievable merit.

At Lawudo I found many old manuscripts, handwritten texts by the Lawudo Lama. The previous Lawudo Lama was called Lama (Kunsang) Yeshe and some people think he has something to do with my life. The Lawudo Lama did not have a monastery, but lived in retreat in a cave. He put a lot of effort into copying texts of the practices of various Vajrayana deities. At that time such texts were very rare, so he wrote many out by hand.

Because they had been stored in the cave which was very humid, the texts were damp, and I used to dry them in the sun. If you don't dry them, the texts grow fungus and are then destroyed by worms. The worms reincarnate among the texts and make some interesting holes in them.

One day when I was laying the texts out in the sun, I saw one old text with the title Mani Kabum. It contains all the history of the evolution of the world, including how Dharma came into this world and how the sentient beings of Tibet, the Snow Land, became the particular objects to be subdued by the Compassion Buddha Avalokiteshvara. Amitabha and the Compassion Buddha are the same in essence and are very strongly linked. And for more than twenty years, the Compassion Buddha and Amitabha have guided not only Tibet and China, but also Western countries, especially by spreading Dharma.

After reading this, I developed faith that the practice was not nonsense, but had valid references and was valuable and meaningful. From this text, I got some idea of how powerful the prayer wheel practice is in purifying the mind and in accumulating extensive merits.

In 1987, when I was at Chenrezig Institute in Australia, I noticed that the place had become incredibly peaceful. It felt so serene that you wanted to be there, to live there. Chenrezig Institute had not been like that before, and I wondered why it had changed. At that time, Geshe Lama Konchog was there. Geshe-la has done a lot of Dharma practice. After he escaped from Tibet, he spent many years in retreat in Milarepa's caves in the Himalayas. He did 2,000 nyung-näs, the intensive two-day retreat on the Compassion Buddha, that involves taking the eight Mahayana precepts and doing many prostrations and mantras. Geshe Lama Konchog has trained his mind well in the path, so I thought that the serenity of Chenrezig Institute might be due to his bodhicitta.

However, one day near the end of my stay there, the thought came into my mind, "Oh, the change might be due to the prayer wheel—it wasn't there before." The prayer wheel is much smaller than the one here at Land of Medicine Buddha, but it also contains many mantras on microfilm and is very nicely made. Some time later, when I was in Brazil at the invitation of a meditation center there, a student gave me a book written by one of Tarthang Tulku's senior disciples about his experiences when he was in charge of building stupas and prayer wheels in Tarthang Tulku's centers. In one section he mentioned that after a prayer wheel was built, the area was completely transformed, becoming so peaceful, pleasant, and conducive to the mind.

This confirmed my belief, based on my own reasoning, that Chenrezig Institute had become so peaceful because of its new prayer wheel. Somebody else experiencing a similar effect from building the prayer wheel helped to stabilize my faith.

There are earth, water, fire and wind prayer wheels. One of the benefits of the prayer wheel is that it embodies all the actions of the buddhas and bodhisattvas of the 10 directions. To benefit sentient beings, the buddhas and bodhisattvas manifest in the prayer wheel to purify all our negative karmas and obscurations, and to cause us to actualize the realizations of the path to enlightenment. All the beings (not only the people but also the insects), in the area where the prayer wheel is built are saved from rebirth in the lower realms; they receive a deva or human body, or are born in a pure land of Buddha.

With the water prayer wheel, the water that touches the wheel becomes blessed. When that water goes into an ocean or lake, it carries the power to purify all the billions of animals and insects there.

I have had a wish, which has recently become stronger, to build a prayer wheel in the ocean. Because I have been requested to help with so many other Dharma projects, the idea of making a water prayer wheel had been postponed. However, when I was in the center in Taiwan recently, in a conversation about prayer wheels, I mentioned the idea. One of the benefactors, who has been running the family business for some years, was very happy to make a water prayer wheel because his father had started the business by buying fish. Since the family's prosperity came from fishing, he felt his family owed a lot to the fish, and he already had in mind of doing something to repay or to benefit the fish.

Because prayer wheels are so powerful in purifying negative karmas, I think it is a very good idea to use them. After I explained the benefits of prayer wheel a few years ago at Kopan, Lorna and Terry voluntarily took it upon themselves to make prayer wheels available to other students who wanted to do the practice. They generously made many small prayer wheels and offered them to many students, including me.

I then offered mine to the king of Nepal. When I mentioned to him that having a prayer wheel helps when one dies, he suddenly became distant. I think it's not a subject commonly talked about to him. He asked, "Do I have to keep this?" So I said, "Yes."

It is also mentioned that prayer wheels stop harm from spirits and other beings and also stop disease, so one idea I have is use them for healing. Anyone with a disease such as AIDS or cancer, whether or not they have any understanding of Dharma, can use the prayer wheel for meditation and healing. For example, sick people could come here to Land of Medicine Buddha for several hours every day to turn the prayer wheel and do the visualizations.

There are two visualizations. With the first, you visualize light beams coming from the mantras in the prayer wheel, illuminating you and purifying you of all your disease and the causes of disease, your negative thoughts and the imprints of these left on your mental continuum. You then visualize the light illuminating all sentient beings and purifying all their sufferings, as well as their negative karmas and obscurations.

With the second visualization, beams are emitted from the mantras and, like a vacuum sucking up dust, they hook all the disease and spirit harms and, most importantly, the cause of disease, the negative karmas and obscurations. All these are absorbed or sucked into the prayer wheel. While reciting five or ten malas of the mantra, you visualize purifying yourself in this way.

At the end recite some malas while visualizing that the beams emitted from the prayer wheel purify all the sufferings and obscurations of the sentient beings of the six realms. These absorb into the prayer wheel and all sentient beings, including you, are then liberated, actualizing the whole path and becoming the Compassion Buddha. (You can also do circumambulations with the same visualizations.)

If someone with AIDS, cancer or some other disease meditated like this and every day, for as many hours as possible, there would definitely be some effect. I know quite a few people who have completely recovered from terminal cancer through meditation. Even though the person might not know about Dharma, about reincarnation or karma; because they want to have peace of mind now and a peaceful death; because they care about having a healthy body and a healthy mind, they should use this extremely powerful and meaningful method of healing.

I would like to emphasize that every large and small prayer wheel can be used by sick people for healing. This practice is very practical and very meaningful. Two years ago, I asked Jim McCann to build a prayer wheel here at Land of Medicine Buddha, not only for people to do the practice, but also to bless the land. It helps all the insects and animals as well as the human beings. Jim and his wife, Sandra, put a lot of time and effort into actualizing this extremely beautiful prayer wheel, though I'm sure many other people helped them. From the depth of my heart I would like to thank them very much for their achievement. A prayer wheel makes the place very holy and precious, like a pure land.