Excerpted from Lama Zopa Rinpoche’s invitation to join the Chenrezig Institute mani retreat, composed by Rinpoche during a stay at Deer Park Buddhist Center in Madison, Wisconsin, USA in July 2000. Scribed and edited by Ven. Lhundup Damchö; excerpt edited by Dr. Nick Ribush. Rinpoche’s entire teachings at the retreat have been edited by Ven. Ailsa Cameron and are published for free distribution by the Lama Yeshe Wisdom Archive in Teachings from the Mani Retreat. 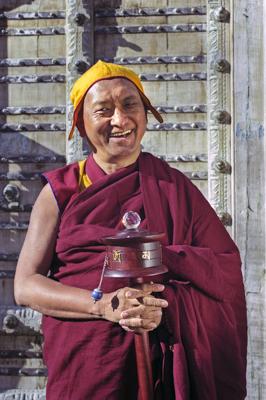 The benefits of reciting the Compassion Buddha mantra are infinite, like the limitless sky.

Even if you don’t have much intellectual understanding of Dharma, even if the only thing you know is OM MANI PADME HUM, still the happiest life is one lived with an attitude free of the eight worldly concerns. If you live your life with the pure attitude free of attachment clinging to this life and simply spend your life chanting OM MANI PADME HUM—this six-syllable mantra that is the essence of all Dharma—that’s the purest Dharma.

It looks very simple, very easy to recite. But if you think of the benefits, it’s not at all simple. Here, I’d to mention just the essence of its infinite benefits.

Reciting the Compassion Buddha mantra just once completely purifies the four defeats of breaking the four root vows of self-liberation and the five uninterrupted negative karmas.1

It is also mentioned in the tantras that by reciting this mantra you achieve the four qualities of being born in the Amitabha Buddha pure land and other pure lands; at the time of death, seeing Buddha and lights appearing in the sky; the devas making you offerings; and never being reborn in the hell, hungry ghost or animals realms. You will be reborn in the pure land of Buddha or as a happy transmigratory being.

When one who recites ten malas a day goes swimming, whether in a river, an ocean or some other body of water, the water that touches that person’s body gets blessed.

It is said that up to seven generations of that person’s descendents won’t get reborn in the lower realms. The reason for this is that due to the power of mantra, the body is blessed by the person reciting the mantra and visualizing their body in form of the holy body of Chenrezig. Therefore, the body becomes so powerful, so blessed that this affects the consciousness up to seven generations and has the effect that if one dies with a non-virtuous thought, one is not reborn in a lower realm.

Thus, when a person who has recited ten malas of OM MANI PADME HUM a day goes into a river or an ocean, the water that touches the person’s body gets blessed, and this blessed water then purifies all the billions and billions of sentient beings in the water. So it’s unbelievably beneficial; this person saves the animals in that water from the most unbelievable suffering of the lower realms.

We are unbelievably fortunate to have met the Dharma and to have the opportunity to do recitation and meditation on the Compassion Buddha. It is an easy way of purifying whatever negative karma we have collected, in not only this life but in many previous lives as well.

Because we have met the Buddhadharma, and especially this method—the practice of Compassion Buddha and recitation of his mantra—it is easy to purify negative karma and collect extensive merit and thus to achieve enlightenment. We are unbelievably fortunate.

Therefore, there is nothing more foolish than not taking advantage of this great opportunity. Normally, we get continuously distracted and waste our lives. Not only that, but all the actions done with ego and with the three poisonous minds of anger, attachment and ignorance create negative karma, the cause of suffering. In all existence, there is nothing more foolish than using this perfect human body to create only suffering.

In places such as Tibet, Nepal, India and Ladakh, there’s a well-established tradition of doing the Compassion Buddha retreat and reciting 100 million OM MANI PADME HUM mantras. The one held at Chenrezig Institute was the first such retreat held in the West and the first in the FPMT organization. This is to happen there once each year—only once each year!

If you’re feeling guilt in your life, you can overcome this through the purification of attending this retreat.

The retreat is not just chanting mantras with sadhanas, but also includes taking the eight Mahayana precepts, if not every day, at least frequently. Whatever merit you collect that day increases 100,000 times. This becomes such an easy and quick way to purify, collect extensive merit, achieve enlightenment and liberate sentient beings from unimaginable suffering and bring them to enlightenment quickly.

Whoever attends a mani retreat is unbelievably fortunate. Even if you can’t attend the whole retreat, you can participate for two months, one month or at least a few weeks. You can do even just one week. I especially hope this retreat will also be established in Mongolia, since their main food is meat and so many animals are killed there every day. This practice helps purify that. After our temple in Mongolia has been built, I hope that thousands of people will attend mani retreats there. Gradually too, I would like this retreat to be established in other parts of the West.

This retreat also blesses the country where it is held and brings so much peace, happiness and prosperity.

Even if you know the teachings on how to meditate on bodhicitta, you still need to receive the special blessings of the deity, Compassion Buddha. You receive these by doing the meditation and recitation we practice in the mani retreat. Therefore, recitation of OM MANI PADME HUM is one way to actualize bodhicitta—to transform your mind into bodhicitta and make your meditation on bodhicitta effective.

Generally, according to my experience, in my home of Solu Khumbu in the Himalayas of Nepal, there are people who live their lives chanting OM MANI PADME HUM but have no idea of the three principal aspects of the path—renunciation, bodhicitta and the right view of emptiness—not even the words. Even though they can’t read and don’t even know the alphabet, they have great devotion to compassion and bodhicitta and live their lives reciting OM MANI PADME HUM. Such people are warm-hearted, very kind, very compassionate. This is proof from my experience that it has the effect of transforming the mind into a good heart and compassion.

Thus, everyone is most welcome to join the 100 million OM MANI PADME HUM mantra retreat.

1 These are karmas so heavy that they ripen immediately as a rebirth in the hell realm upon the exhaustion of the karma of this life. The five are: killing one’s mother, killing one’s father, drawing the blood of a buddha, killing an arhat and causing disunity among the Sangha.  [Return to text]

Mantras of the Great Compassionate One: MP3
Teachings from the Mani Retreat