An Audience With His Holiness the Dalai Lama (1989)

By His Holiness the Dalai Lama
Dharamsala, India

In this question/answer session, His Holiness the Dalai Lama responds to general queries about Buddhism from students at Tushita Meditation Centre, Dharamsala, India, in May 1989.  Lightly edited by Sandra Smith, October 2012. 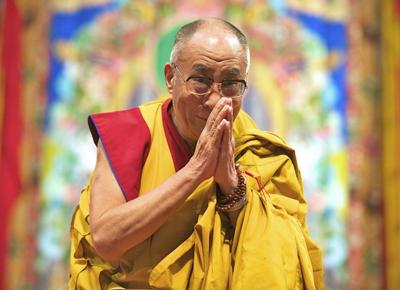 Question: Is it good for some people to get help dealing with negative emotions using Western therapy as well as Buddhism?

His Holiness: That’s difficult. There are two kinds of people. One person is not very, very familiar with Buddhist teaching; just knowing something about Buddhadharma, but not having a deep enough knowledge. In that case, maybe there should be a combination of both. Then the other type of person who has deeper knowledge about Buddhadharma and the different subjects such as altruism and patience on the method side, then on another side knowing about awareness, about impermanence, suffering nature and the most important thing knowing about shunyata, selflessness and these things, and also something about deity yoga. In this case it’s maybe not so good to mix. It may make some confusion. I just feel this, but I don’t know. The theories of karma, rebirth and these things aren’t included in therapy, so it may create some confusion. This is my feeling.

Question: As an Israeli, I live in a country which depends on its military strength in order to survive. To save my own life and the lives of my people I have to take part in a war and perhaps kill people. Would Your Holiness give some advice on this situation?

His Holiness: That is very sad. The best thing from the Buddhist viewpoint, if that person is Buddhist, first it’s important and necessary to avoid killing as much as you can. Then in particular circumstances if there is no way to avoid having to kill, then try to develop a sincere motivation thinking of the benefit of the larger community. Not on the basis of strong attachment to “my community, my nation.” Simply concerned about the larger community, their welfare and benefit, their future, without attachment. To protect the larger community’s interest, then do some action. Then afterwards, feel regret and recite some Dorje Sempa (Vajrasattva) mantras and do some prostrations and recite some other mantras. But the best thing is to try to avoid.

Question: Should we be active in political, social or ecological work, or should we emphasize study and meditation?

His Holiness: It largely depends on the individual person. Generally speaking, what is the purpose of Dharma practice? This is helping or serving other people. Therefore people who are trying to develop altruism should be involved in these fields. This is practical service for humanity. But then in another case this person’s spiritual practice may become less firm and once they get involved in these different fields, they might not develop a full spiritual determination or attitude. So sometimes maybe there is a danger. You get involved in politics and eventually the dirty atmosphere of politics invades your own way of thinking, so you become a slave of dirty politics. In another case, without losing your own identity, your own principals, then you get involved. You serve in these fields as much as you can, and at the same time you can protect yourself without getting the bad influence of politics.

Question: Is it possible to have a family and still attain single-pointed concentration and emptiness?

His Holiness: Buddhists don’t accept a creator. Buddha originally was an ordinary being, and then eventually he became enlightened. Shakyamuni Buddha is not as powerful as a creator. Since we do not accept a creator, not everything can be put on Buddha’s head. Buddha’s energy and sentient beings’ karma is equally powerful, but at the same time, Buddha already purified all his negativities and was fully enlightened, so he has infinite energy. Even in the ordinary sense, someone who has good knowledge, behavior and motivation, that person becomes very influential. So if you come closer to that person, you’ll get some kind of positive influence. Similarly if there’s some kind of mental feeling of closeness with a Buddha, then prayer is a form of appeal. Then that makes some kind of appeal. Appeal means you want something, you are welcoming, inviting some energy, some influence from that person. Therefore it creates a place where Buddha’s energy can easily absorb. If you don’t bother from your own side, it means you haven’t created or prepared a place where Buddha’s energy can come. So from that viewpoint, prayer isn’t just empty words, but is a sincere motivation and understanding of Buddha’s qualities and one’s own desire to aim for that same goal. Then, like if Buddha has an electric charge, there must be some kind of proper receiver, then the electric charge will go, however, a stone cannot charge. This is how prayer works.

Question: Is it possible to accept parts of Buddhism without accepting all of the Buddhist doctrine?

His Holiness: Oh yes. Some of my friends remain as sincere Christian practitioners and at the same time they practice or adopt some Buddhist ideas according to their own basic beliefs. That’s perfectly alright.

Question: Will I be reborn in a lower realm if I don’t practice Buddhism as taught?

His Holiness: That is difficult to say. The future life and destination not only relies on the present life but also on the previous lives. Even for a Buddhist practitioner there’s no guarantee they’ll not go to the lower realms. And there’s more danger for people like us. We take different vows, but in our daily lives we don’t fully observe them, so we have downfalls. Buddha made sila or morality, like bhikshu vows. For certain people, that becomes a source of happiness, and in certain cases, that becomes a source of pain and suffering. If the person takes the bhikshu vow and practices well, then that vow becomes a source of happiness—a source of nirvana; a foundation for nirvana. If someone takes ordination, but doesn’t follow it properly, that becomes the source of negative experience. So, there’s no pervasion that if you don’t practice Buddhism you’ll fall in the lower realms.

Question: In Tibetan Buddhism, is the emphasis different for Westerners than for Tibetan practitioners?

His Holiness: I think so. Generally because of social background, there may be some differences. At the basic level, there are no differences. The same human beings are on this planet. But at a certain level, there are some differences. If we look at the texts written by Indian pandits and those written later by Tibetans, there are some different approaches. In India, there were many non-Buddhist schools of thought, therefore the approach is slightly different. In the Tibetan case, the majority are Buddhist. So we have to return to the ancient, Indian way of teaching. Do some comparative study of non-Buddhist schools or thoughts and Buddhist studies side-by-side, and make comparisons. I think this is more useful. This is generally speaking. But for the individual there are varieties of Westerners, with different dispositions. But generally speaking it’s better to follow the ancient, Indian way.

Question: How can we best practice the Dharma in our home countries without having teachers?

His Holiness: On one occasion when Dromtönpa was about to pass away, he told his disciple that your teacher should be the scriptures, you should not rely on the person but rather rely on the scriptures. Now there are more and more English translations, so that’s important. And one important thing—don’t rely on just one book. Read and seek as much as you can. If you read only one scripture, even if it’s Buddha’s own words, you may not get the full picture and if that text explains the Yogacharaya, although it’s Buddha’s own words, it doesn’t give the complete picture and you could have many misunderstandings. So in this way, the Tibetan tradition is very good. We study the essence of the Hinayana teachings, then the sutra, Mahayana teachings, plus the Tantrayana teachings, and within tantra, the Kriya Tantra, Anuttara Tantra, Yoga Tantra and Maha-anuttara Yoga Tantra. Furthermore, we study the Nyingma tradition, the Sakya tradition, Gelug tradition and Kagyütradition. That’s very useful, very helpful. Once you know all these different traditions then there’s less danger to rely on incomplete teachings. Also it’s very helpful to avoid generating misunderstandings.

Question: What part of the mind reincarnates?