Advice on Practices at the Mahabodhi Stupa

This advice was given by Lama Zopa Rinpoche while he was circumambulating and reciting texts at the Mahabodhi Stupa, Bodhgaya, on January 25, 2012. The six benefits of reciting the Buddha's name and mantra are excerpted from a teaching by Rinpoche at the entrance of the stupa, Bodhgaya,on January 20, 2012. First editor unknown; second edit by Sandra Smith, August 2019. 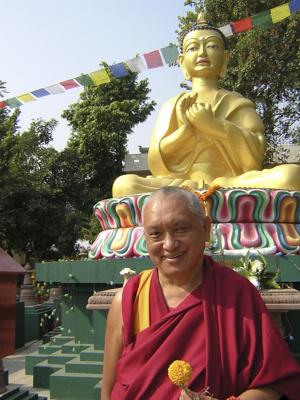 I have been reciting Dependent Arising: A Praise of the Buddha (Tib: ten drel tö pa), a praise to the Buddha having found realizations. The Buddha realized that the essence of all phenomena is empty—not non-existent, nihilism, but emptiness only. While there is emptiness only, tong pa nyi, there is also existence—things exist in mere name, merely labeled by mind—therefore those two are unified. In Madhyamaka, those two are unified. Phenomena are devoid of eternalism, true existence, and of nihilism, non-existence.

The Buddha realized this and revealed the path to sentient beings so we could realize this. Buddha liberates sentient beings by teaching that the cause of suffering is ignorance. He shows us how to realize this, how to counter this false mind and how to eliminate ignorance by realizing emptiness. By showing dependent arising the Buddha liberates us from the ocean of samsaric sufferings and leads us to enlightenment. We are liberated from the gross disturbing-thought obscurations, nyon drib, and our mind becomes separated from the subtle obscurations, she drib, by directly perceiving emptiness. Of course, to be free from ignorance we also have to realize bodhicitta, the path of method.

This prayer that I have just read, Dependent Arising: A Praise of the Buddha by Lama Tsongkhapa, is regarded as the best praise to Buddha.

Today I hope you have  brought the paper from Root Institute or you know by heart Buddha Shakyamuni’s name and mantra, which has six benefits.

Benefits of reciting this name and mantra just one time:

1 and 2. You get the benefit of having prostrated and circumambulated to all the buddhas, Dharma and Sangha of the ten directions and the three times.
3. All the negative karma collected from beginningless rebirth is purified.
4. You will quickly achieve full enlightenment.
5. You won’t be harmed by enemies and interferers.
6. You will be liberated from disease and spirit harms.

Then recite the mantra which multiplies the merit:

This mantra multiplies or increases the merit of each prostration or circumbulation one million or maybe ten million times. It is good if everybody recites this together. That is very good.

When you go around the stupa where the bodhi tree is, you can recite the prayer found at the end of chöd practice, The Thought Transformation Prayer of the Buddha’s Previous Lives (Tib: DAG GI TÖN PA SAN GYÄ CHOM DÄN DÄ ....) At the end of the chöd practice, Slaying the Ego, there is a prayer about the Buddha’s life stories. The chöd practice, dedicating the illusory body to collect merit, has this prayer at the end. This prayer is about the Buddha’s previous lives, how the Buddha lived and practiced. So I am also going to recite that now; it is a very good one to recite. If you have the English prayer you can recite it in English and those who read Tibetan can do it in Tibetan.

If you can do more than that, there is also the Guhyasamaja direct prayer, the direct path to enlightenment—Guhyasamaja, Yamantaka or Chakrasamvara. You can also recite the Hayagriva direct prayer and in this way you leave imprints of the whole path to enlightenment. In order to achieve enlightenment quickly you have to make [imprints] on your mind, it has to come from your mind. In order to reach enlightenment quickly, to make preparation, it is very good to recite the prayer which comes at the end of the sadhana, to leave imprints on your mind as much as possible.

Other texts you can recite are the Vajra Cutter Sutra or the Golden Light Sutra. You can also recite those important teachings, Bodhicaryavatara, or other teachings and commentaries of the Buddha, or Nagarjuna’s teachings.