In this teaching, Lama Zopa Rinpoche discusses sur practice with monks during a dinner at IMI House, Sera Je Monastery, Bylakuppe, India, on 23 December 2013. Rinpoche explains that the practice pacifies obstacles at the Dharma center, repays our karmic debts to animals such as termites and mice, and creates the merit to be reborn in the pure land. Rinpoche recommends sur as a daily practice at the Dharma centers. 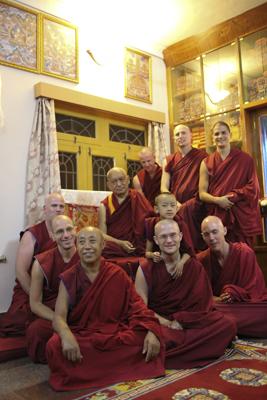 Rinpoche: Do they circumambulate the stupa? [Group laughs]

Monk: Sometimes, when they make the turn, they probably go around.

Ven. Roger: Of course, they had to tear down the [wall] and rebuild it.

Ven. Roger: Rinpoche asked them to do sur first. That was one idea, doing sur.

Rinpoche: One method is to make sur. Sur is dedicated for all the sentient beings, especially smell eaters. Is sur done there or not?

It pacifies obstacles; obstacles caused by spirits and landlords __ [Tibetan], so it helps that. It pacifies obstacles, it helps for many things and it creates a lot of merit, the cause of success, and to be born also in a pure land. Therefore, somebody has to do sur for the center. This method will help, it’s very good.

The tsampa, it’s like pak—not wet pak but very dry pak—mixed with butter. Mix it with the butter and then sugar—three white things and three [sweet] things—brown sugar, [white] sugar and honey.

And then internally is the meditation.

I made twelve substances in America, except one thing was missing. It’s called “moon,” the blue stone which sometimes has gold or silver spots. What is it called?

Rinpoche: Lapis lazuli, yeah. Lapis lazuli, I didn’t recognize, so that one was missing. Otherwise, I made quite a bit of the substances. Then the second time I had all [the ingredients], lapis lazuli and everything. So I made it with twelve substances by myself two times. And then the third time it was made, I don’t know who made it.

Rinpoche: You don’t have to put a lot, just a small [amount] with tsampa, then put butter and mix, like dried pak, and of course, before you mix it, you put the three white substances. Then you put these twelve substances and that’s what makes it very powerful externally.

You make it like dry tsampa and mix it, then you offer a few spoonfuls on the fire. You make the fire and then you put a few spoonfuls. You light the fire outside and then you put more and more. You want it high, and another one on top, and another one on top, like that, but keep the fire going outside, around it. Then it will get burnt, like that. Otherwise, if you cover all the fire with it, then the fire may stop because there’s no way for it to breathe.

So sur is very, very good. The reason why the white ants, the termites, come is because we owe them something, we have karmic debts. In the past we used something from them and we owe karmic debts.

Therefore, by doing sur, those kinds of problems—even with the mice which are eating food, taking food or these things—by doing sur, it makes them go away. Because our karmic debts are paid, so then they go away.

It’s all basically our karma because we owed them in the past and that’s why they came; it happened like that. It’s the same with the lice and with the body, it’s exactly the same. So any animal that comes to eat [our body], it’s the same. It’s because of the karmic debts.

If you are doing sur, then you pay the karmic debts and it helps them to go away or to become less, it also helps that. But not only that, overall sur is very beneficial. It helps smell eaters very much. They have a hard time finding food; their particular enjoyment is smell, so it has to be tsampa. It cannot be wood; it cannot be medicine.

So sur is very, very beneficial.

Monk: Rinpoche, what are the twelve substances in Tibetan?

Rinpoche: __[Tibetan] Twenty-five [substances]… It must be twenty-five.

Rinpoche: Oh, naturally I did.

I have the Tibetan text. After you gave this sur, the smell, then you have to give teaching to the spirits and the smell eaters, so I added a passage from the Bodhicaryavatara about bodhicitta. Along with that, there’s a mantra to not suffer when you die, to not get heavy disease or any pain, to not get problems at the time of death, to have peace.

There are two mantras. Normally, sur practice doesn’t have that, it has a prayer for yourself to be born in a pure land, and also for the pretas to be born in the pure land. So there at the end, I put two mantras. Both mantras I put there, so you have the choice. That also helps so that when you die you don’t have to go through heavy problems, pain or whatever. You will die in a peaceful way, so I put it there; it is there.

I extended some more teachings to smell eaters. I did translate a long time ago from the Tibetan text into English. But after I put together my text, then I don’t remember whether I translated it or not. We do have an old one translated.

My text for sur practice can be printed and given to those who can read Tibetan.

Sometimes when another person dies, I think sur is done every day for the person who died, for that person’s intermediate stage, so the sur is done because that’s what the smell eaters __ [Tibetan] can get, can enjoy.

The story that His Holiness the Dalai Lama mentioned during the teachings was that one time Kyabje Trijang Rinpoche—who was my and Lama Yeshe’s root guru— was doing sur practice and the smell eaters came, but [they couldn’t eat] until the mantra, NAMA SARVA TATHAGATA AVALOKITE OM SAMBHARA SAMBHARA HUM, was dedicated. Here it says seven times, that’s the main dedication, so then the smell eaters could get [food] filling the whole sky __ [Tibetan]. When it was dedicated, they got unbelievable, unbelievable, unbelievable enjoyment. Wow, wow, wow.

Until the mantra was recited they could not get it. After the mantra was chanted, then His Holiness Trijang Rinpoche could hear; he could see or could hear so much eating [Rinpoche makes a sound] near the fire puja, near the fire, he saw that. I don’t remember the details of the story, but His Holiness mentioned this in a teaching about spirits, that when you do sur, they come.

I try to do sur, but without missing, it didn’t happen. [Rinpoche laughs] I missed. Geshe Lama Konchog said once you start sur, then you must do sur all the time, because the spirits are waiting for you. The words are very good.