Big Love: The Life and Teachings of Lama Yeshe

Coming Soon! Big Love, the official, authorized biography of Lama Yeshe, which will make a significant contribution to the history of Tibetan Buddhism in the West. It contains personal stories of the lamas and the students who learned, lived and traveled with them, as well as more than 1,500 photos dating back to the 1960s. We are now looking at a publication date in March 2020. Read more below.

Find out how you can support this project here. Register your interest in purchasing a copy of the book by sending an email to biglove@lamayeshe.com. When the book is available, we will email you with a link to place your order.

Click here to read Chapter 7, which begins in 1969 as the lamas and early Western students trek to Lawudo and start to establish Kopan Monastery in Nepal. Click here to read or download the pdf of Chapter 2 and the article by Laura Miller, featured in Mandala magazine, July 2019 edn.  You can also listen to Adele Hulse's dramatic readings from Big Love on the LYWA YouTube channel. 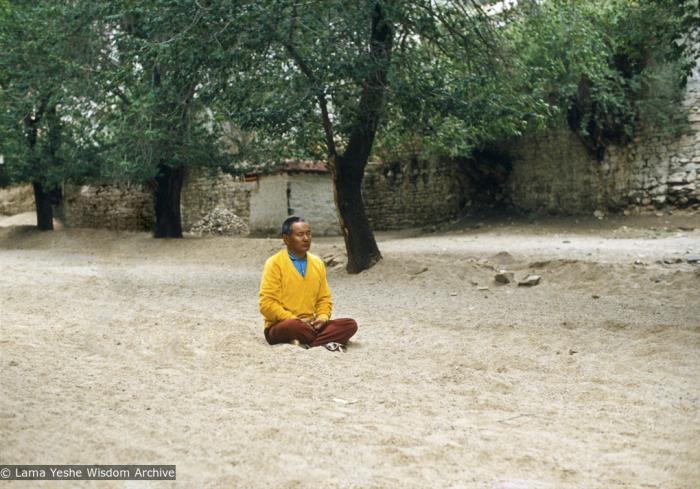 For the first half of the 1940s, World War II was in full swing on three fronts—Europe, Asia and North Africa. By the time the war came to an end in 1945 the face of world politics had changed drastically.

In China, the Communists came out victorious in a civil war and in 1949 Mao Zedong formally proclaimed the Communist People’s Republic of China.

In Tibet, the political turmoil continued. In early 1941 the controversial Reting Rinpoche decided to enter an extended spiritual retreat and relinquished his role as regent to Taktra Rinpoche under a mutual agreement that he could take the position back upon completion of his retreat. The years under Taktra Rinpoche’s rule were full of corruption and bureaucratic negligence.

Every Tibetan family had relatives in monasteries. Those who entered monastic life on Dondrup Dorje’s mother’s side of the family went to Drepung Monastery, whereas those on his father’s side went to Sera. After some deliberation in the family, it was decided that Dondrup Dorje would go to Sera Monastery. The Rakor nuns made him a little set of maroon and yellow robes. And so, in 1941, at the age of six, Dondrup Dorje entered Sera Monastery under the tutelage of his uncle, Ngawang Norbu.

The great monastery of Sera looks over the flat Lhasa plain toward the Potala Palace, home of the Dalai Lamas for over four hundred years. On the mountain behind Sera Monastery sits Sera Chöding, hermitage of the founder of the Gelug lineage, Lama Je Tsongkhapa. It was here that Tsongkhapa wrote a great commentary on Fundamental Wisdom, an important Buddhist text composed by the Indian saint Nagarjuna.12 While writing this commentary, Tsongkhapa invoked Manjushri. At one point the Tibetan wisdom syllable AH appeared in the air in front of him.13 Once he had finished writing the great commentary, the AH syllable embedded itself in a rock below the hermitage and is said to still be visible today. Lama Tsongkhapa prophesied that a large monastery would be built on that spot and the monks there would specialize in the study of the Middle Way. Jamchen Chöje, one of Tsongkhapa’s chief disciples, began building Sera Monastery in 1419, the same year his master passed away.

When Dondrup Dorje entered Sera Monastery it was a bustling town with a population of around five thousand monks and comprising two main colleges, Sera Je and Sera Mey, as well as a tantric college, Sera Ngagpa. Winding flagstone paths connected hundreds of buildings made of the same gray stone. The uppermost walls of the main buildings were edged with red pembe friezes, borders of tightly bound tamarisk twigs daubed with red paint that traditionally adorn the upper parapets of Tibetan buildings. Those walls were also topped with gold-colored finials. The only other color to catch the eye came from bright cotton door hangings, maroon monks’ robes and huge buddha images painted on large flat boulders. Many of these bas-relief images were said to be “self-emanating”—that is, they appeared spontaneously but gradually from the rock face and were then painted.

Inside the main temple buildings, brilliantly colored murals in the intricate Tibetan style portrayed stories of the lives of saints. Red lacquered pillars were topped with bands of primary colors; beautiful enormous thangka paintings14 framed in rich brocade hung from the ceilings beside huge golden statues, some three stories high. Inside the temple buildings, the only light came from butter lamps, some of them as large as three feet tall. Everything, including the stone walls and wooden handrails of steep stairways, was blackened and saturated with six hundred years of oily smoke from thousands of butter lamps.15

It has been said that around one sixth of the male population of Tibet became monks and resided in monasteries, so it was common to encounter one’s relatives there. The Sera monks lived in seventeen different hostels (Tib: khangtsen) organized by geographic region. Monks who came from Tölung resided in Tsawa Khangtsen; this was where Dondrup Dorje’s uncles and his half-brother Puntsog Thinley lived and where Dondrup Dorje came to live as well. It was here that Dondrup Dorje finally met Dorje Tsering, his other half-brother, for the first time and learned he had personally known the Rakor abbess, Aché Jampa.

Dondrup Dorje had a number of relatives who were members of Sera Je College. His uncle, Ngawang Norbu, was the student of still another uncle who had once been a cook for the Sera Je assembly hall and had prepared tea and food for the regularly scheduled pujas.

Dondrup Dorje was given a room in Tsawa Khangtsen with an older uncle, a monk called Losang Tsultrim. The room was about six feet by eight feet in size and poorly furnished, with only a thin rug on the floor. Losang Tsultrim instructed the boy in domestic skills and demanded total obedience. Ngawang Norbu, who lived nearby, taught him basic prayers and rituals.

First Dondrup Dorje learned the Tibetan ABCs.16 Once he had mastered his letters, he learned how to read scriptures, his lessons focusing on learning common prayers. Soon after, much of his day was spent memorizing and reciting texts and prayers, such as the Bodhisattva’s Confession of Moral Downfalls and the Praises to the Twenty-One Taras.17 This is still the traditional method of study for young monks and nuns. Throughout the monastery the days and nights were filled with the sound of young voices loudly reciting texts and prayers, over and over. Mornings were devoted to memorization, and every evening the young monks had to recite what they had memorized that day for their teachers. This technique enables monks to develop absolute recall of scriptures and philosophical texts, to be able to cite such material from memory during debates and to have total familiarity with the root text being taught as well as other relevant commentaries on the same subject. This was also a very practical skill since the dim light inside the monastery buildings often made it impossible to read.

In addition to his studies, Dondrup Dorje’s daily duties also included sweeping, scrubbing the stone floors and washing and cooking for himself and his two uncles. “We rose just before dawn,” Lama Yeshe recalled. “The first thing I did was to clean my uncle’s house, sweep the floor, put everything in order, make tea and serve him. We always had the same thing every day, so there was no problem deciding what to eat: we had tsampa for breakfast in the morning, tsampa for lunch, and for dinner, more tsampa. Sometimes we had vegetables and we drank hot butter tea. We all loved butter so much!”

If Dondrup Dorje’s work was not perfect he was beaten with a leather strap or a heavy wooden stick. He was even kicked. While some monks at Sera say they were never beaten, the treatment Dondrup Dorje received was not unusual. Many of the younger monks were beaten often—on their head, shoulders, elbows, knees—wherever it hurt the most. Losang Tsultrim was a tough master and monks in rooms nearby often heard the sound of Dondrup Dorje being beaten. Once the boy was beaten unconscious for not cleaning things properly. “But he was really very kind to me, because now I know how to clean,” Lama Yeshe said later.

Tibetan children can be very slightly built and Dondrup Dorje undoubtedly looked quite fragile in his voluminous red robes with his little head shaved. But no one would have felt especially sorry for him, bruised and beaten though he was. He was just one child among hundreds of little monks who came to Sera every year and considered themselves fortunate to be there. Classmates tended to form close friendships and the constant hardships undoubtedly strengthened the bonds between them.

Dondrup Dorje must have cried himself to sleep many times, but in later years Lama Yeshe said the beatings he had received from his uncle taught him great patience and endurance. “I was really happy to be a monk,” he recalled, “but sometimes I questioned the situation regarding my uncle, Losang Tsultrim. Everyone knew how tough he was. Usually students stayed with him for only a short time. Some left because there were too many beatings. It was a difficult life, very strict.”

[Click here to read this chapter in its entirety, along with the Big Love article featured in Mandala magazine, July 2019 issue.]

13 The syllable AH is the first syllable of the Sanskrit alphabet, the divine pure language from which the Tibetan alphabet was created. ah is said to be the primordial vowel sound, the sound from which all other sound originates, the fundamental cause of all speech and the source of all mantras. Thus it also symbolizes the Buddha’s speech and, as such, appears at the throat chakra when visualizing an enlightened being. The syllable AH is also the essence of all phenomena, embodying the original state of emptiness from which all things arise. In Sanskrit, AH is also a word of negation. Thus, AH is the shortest version of the Perfection of Wisdom Sutras; all the Buddha’s wisdom teachings can be condensed in the single syllable AH. [Return to text]

14 Tibetan thangkas are generally religious paintings on cloth, which are framed with borders of brocade. [Return to text]

15 Butter was the yellow gold of Tibet. Traditional Tibetan tea is made of hot tea, salt and butter churned together into a frothy soup. For a Tibetan, the thicker the slick that forms on top of a cup of tea, the better. Pilgrims would crowd the temples carrying gourds of butter and wooden spoons to ladle it into the offering lamps. Even today Tibetans offer copious amounts of butter in lamps on their temple altars. [Return to text]

16 In Tibetan, the alphabet is referred to as ka kha ga nga, its first four letters.[Return to text]

How to Support This Project
Big Love: Mandala magazine article and Ch. 2 (PDF)