In this letter to an Indian taxi driver, Rinpoche advised that success and happiness are the result of our virtuous actions. Rinpoche also recommended a powerful mantra which has many benefits. 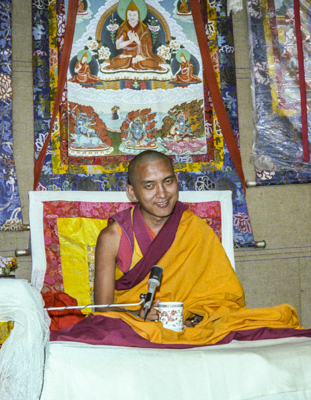 The most important thing, as experienced in my own case also, is that nobody wants suffering and everyone wants only happiness, hence we don’t give harm to others, even insects. Everyone wants happiness and not suffering, just like oneself. The mind of everyone is the same, hence we don’t harm any being—animals, humans, and up to worldly gods—and we benefit sentient beings as much as possible. For example, if there are insects on the road we put them away on the roadside; we can blow them away or set them aside. This is just an example. We should help others as much as possible. Toward humans, to those who have no food, we can give bread, and if they have no money, we can give them one rupee, like that. This is what the Buddha explained and it is also my experience. If we help others, then we don’t receive harm from them.

Karma is like that. The evolution of problems is that actions done with attachment to the happiness of this life are nonvirtuous. Also, actions done with anger and ignorance (not knowing) are the same, nonvirtuous. Some religions have beliefs opposite to Buddhism and instead of benefiting they are harming, for example, by performing animal sacrifice, (though it is less than before). There are many so-called religious practices that harm others. If the actions that are done harm others, then sickness and problems result. We receive the harm. Also, by harming others, from life to life, we receive harm from others. Every time we don’t harm but benefit others, we receive benefit 500 times. By giving benefit and not harm, we get benefit for 500 lives. The benefit lasts from life to life—happiness, wealth and long life, up to buddhahood, the total cessation of problems and the completion of all the realizations.

The whole thing is karma. It depends on that. From virtue, non-attachment to this life, benefit and happiness comes. It is said by Nagarjuna, the Indian omniscient one, the pandit from Nalanda in India, who propagated the teachings of wisdom in the world, “Actions born from anger, attachment and ignorance are nonvirtuous, and from that all the suffering arises.” From non-attachment, non-anger and non-ignorance, which are positive and pure, virtue comes. All the happiness of humans and devas is born from that.

The Buddha said in the Dharmapada, “All phenomena are created by the mind.” The world, which we use and enjoy, comes from our karma, and as it is used together with others, it is our collective karma. By utilizing objects, happiness and suffering arises. All that comes from our mind. The Buddha said, “Mind is the principal and goes preliminarily,” which means before the actions of body and speech. Also, our motivation is an action of the mind. For example, if by taking or generating a good heart, we give a talk to someone, what comes from that is happiness, just as the shadow follows the body. Hence, by creating good karma, there’s always happiness. Phenomena are created by the mind. The mind is the principal.

Accordingly, by generating a bad mind, then what comes from that is suffering. Take the example of the ox—after the ox comes the cart. The ox has to pull a heavy cart and it can’t express its feelings except by not walking. Then it is beaten until it is made to walk again. It is unbelievable suffering. That is the example. These points above explain the most important thing concerning our happiness and suffering.

There’s a story I want to tell you. One student who was very devoted to me donated land to start a center. His family was rich and all their responsibilities came onto him. He had an expensive house, however the family’s business only went down and he lost millions of dollars, but his mind didn’t go down. His mind maintained virtuous thoughts, devotion to the guru and renunciation of samsara, which is in the nature of suffering. Externally he lost the business, but in reality he gained in life, merit and the development of the mind to enlightenment, guru devotion and renunciation of samsara. These basic virtuous thoughts developed and increased, leading not only to liberation from samsara, but to great enlightenment. So he didn’t lose, he gained. He lost only outside money, which was nothing compared to what he gained.

I will stop here. I’m sorry this became long, but since you are new it took time to explain.

There is a mantra to recite if you can:

The second benefit is that by making a stupa, which represents the Buddha’s holy mind, just by seeing a stupa, the sufferings of the three lower realms—animals, pretas and hell beings—are purified and it plants the seeds of enlightenment, buddhahood. The stupa becomes meaningful to behold, and anyone who goes around the stupa, even dogs or other animals, becomes free from the three lower realms—the hot hells and the surrounding hells, etc. It is unbelievable like that.

It also blesses our body, so that when others see us or touch us, there’s double benefit. It frees them from the five heinous crimes (of killing one’s father, killing one’s mother, killing an arhat, drawing blood from a buddha, and causing a schism amongst the Sangha). These heavy negative karmas are purified. We get a higher caste, like in India where people respect those who are from a higher caste, and then we are able to benefit them.

As well, there are the benefits of wealth, long life, protection from harm, liberation and enlightenment. Recite this mantra as much as possible, either seven or twenty-one times, half a mala or one mala. It is so good and has so much power.

[See also the Mantra Taught by Buddha Droden Gyalwa Chhö to read more about the benefits of this mantra.]

Thank you very much to you, from my heart, for understanding all this.

With love and prayer ...

P.S. Please read the back of the elephant card, so then you can understand its benefits. It comes from a Dharma text. It also has my signature on it. The small one you can put in your top pocket. It’s for success.