In these teachings, Lama Zopa Rinpoche asks students to abandon eating meat and become vegetarian. Rinpoche also discusses animal liberation and other ways to benefit animals, and explains the karmic connection we have with animals from past lives. Excerpted from teachings on August 24, 2013 and August 27, 2013, given at the 100 Million Mani Retreat in Ulaanbaatar, Mongolia. Lightly edited by Ven. Joan Nicell. If Less People Eat Meat, Less Animals Will Be Killed

I myself have been vegetarian for so many years, even when I was in Tibet, but sometimes I had difficulties. Sometimes some gurus [would advise me to eat meat] for my health, but then I decided to not eat it because it is difficult to explain. In highest tantra, Secret Mantra Vajrayana, the tsog offering has bala and madana, which doesn’t even have the name “alcohol” and “meat” because it is not eaten as meat and alcohol. But we ordinary beings don’t have tantric realizations, the Six Yogas of Naropa or some other completion path, the realization of the clear light and illusory body, bliss. We don’t have these realizations of tantra. Of course, it is explained in the root tantra and in the Vajrayogini commentary. What I have seen is that you have to have those things, you can’t use juice or cheese. In the past some monks used those but that is not correct. In the root tantra it is explained in verses that bala and madana are necessary. The bala, meat, is to hook the illusory body realization, and the alcohol is to hook the realization of clear light, so as to achieve the dharmakaya and rupakaya, a buddha’s holy mind and holy body.

By achieving the clear light we achieve the dharmakaya and by achieving illusory body we achieve the rupakaya. So to achieve the clear light and illusory body, we use meat and alcohol which hooks the realizations. There is a quotation that says that if you don’t have the actual experience you should at least take them with the meditation trying to visualize bliss and voidness. You should try to think that, try at least to imitate that. Even don’t use their name so as to not eat them as meat and alcohol, that is why their names are changed to bala and madana. Thinking that people will stop eating meat is crazy. There is meat everywhere. So for tsog you need it, but just a tiny bit. You don’t need a huge piece of meat or many bottles [of alcohol] to drink, I think some people do that but that is not what it says. To do tsog and then drink many bottles and at the end fight, to manifest all the bad things—it is not like that. When doing tsog, take the blessing. Try to imitate, at least try to visualize like that, take the blessing like that. That is great preparation in your mind to achieve enlightenment. That is all. I will stop.

Bakula Rinpoche, as you all know, was vegetarian his whole life, but when he was old I saw him eat three pieces of meat on his plate. I think his doctors told him to eat meat for his health, so during lunch there were three pieces of meat on his plate. He took them like medicine, three pieces [the size of] my finger. If for a question of health, if you need to eat meat to practice Dharma, to practice Dharma for sentient beings, then it is OK.

In Vietnam, one person, I don’t know him, but that person heard I had had a stroke and then he became vegetarian for his whole life. I don’t know him, I never met him, but when he heard I got a stroke he became a vegetarian. Then one student in Singapore, she is a student but I don’t know her personally, she had gone to Kopan, when she heard I got sick she decided to take the eight Mahayana precepts all her life. She came to Kopan two times to receive teachings, and I told her it might be difficult to take for the whole life, especially when traveling, so I told her to take it easy.

Since I got a stroke so many people liberated animals. In Tibet so many sheep and goats were liberated. Also in Singapore I think one hundred million animals were liberated. Saving the lives of one hundred million animals was already finished several years ago, then the second time saving a hundred million is also maybe finished, I’m not sure. They have done the most number of saving animals lives, not only saving but they put the fish in a truck, then the truck goes around the center several times. When they liberate small animals they bring them inside the center and go around stupas and texts. How many times they go around brings enlightenment for the animals as well as for the people and children. Then they bless water by reciting mantras, and they wash or sprinkle [the animals]. If it is a big bag of shell animals, they pour water on them. The second is to do that. The third is to recite mantras loudly so that for those who can hear them, it plants the seed of enlightenment.

You should try to benefit the animals as much as possible, not only saving them from danger to their life. Not just that, but try in many different ways to benefit them. There are so many unbelievable, unbelievable, unbelievable benefits of mantras, as mentioned by the Buddha, so try to use them. In Singapore, our center Amitabha Buddhist Centre has liberated the biggest number of animals in the world. Many people have liberated animals. I think one of the best things to do is that—to cause long life for the animals and for others. Of course, there are pujas and different things that can cause long life for human beings as well.

Take Good Care of the Animals 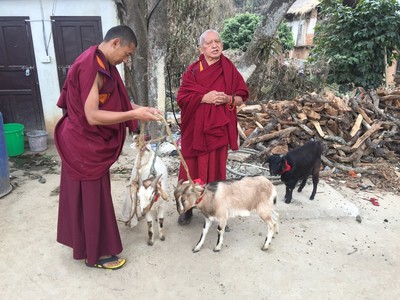